WiFi routers are mainly created to send internet signals around a particular area, supporting a number of devices, with speeds that are consistent to what your internet service is providing. However, there are routers that have the capability to stream 4K or HD videos, while distributing bandwidth to other gadgets, computers, or tablets, depending on priority customized by the user. But there are many factors and technologies affecting a WiFi router’s capability to offer excellent streaming capabilities.

This now gives as an idea on things to consider for purchasing a WiFi router that makes streaming a primary feature. In our search of the 5 best WiFi routers for streaming in 2020, we’ll present to you what makes customers consider the best routers in the market, as well as innovations that fulfill the promise. 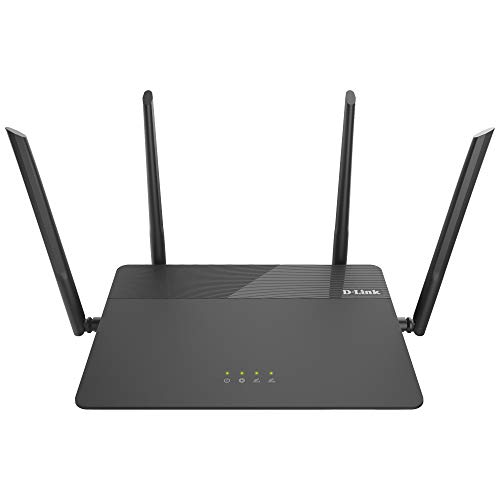 With being MU-MIMO ready, the AC1900-capable D-Link DIR-878 has the capability of sending signals to different devices at the same time, saving you the inconvenience of waiting for different devices to load data, regardless if you have more than 5 or about 10 connected altogether. And because the WiFi router is dual band, speeds can go to 600Mbps for the 2.4GHz band and 1300Mbps for the 5.0GHz band, giving you the capability to choose where to connect for the optimal speed possible.

Whether you’re streaming content using a tablet or watching 4K videos on your laptop, you’ll know that speed is up your way with Smart Beam Forming that can direct bandwidth as you go to where your WiFi router can reach you. And because it has 3 receiving and 3 sending data streams, there is independence when it comes to data transfers. Top it up with a dual-core processor, and you have previously mentioned capabilities enhanced manifold with performance that defies expectations.

As for range, the four high-performance antennas, 2 for 2.4GHz and 2 for 5.0GHz, sends signals throughout the home. So even when you’re in the yard watching YouTube videos or in the bedroom streaming 4K Netflix, nothing’s beyond reach with the DIR-878. 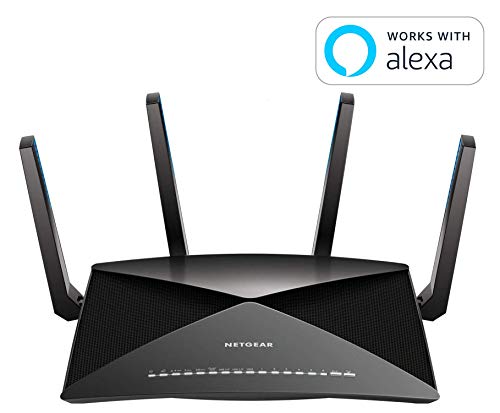 Touted to be one of industry’s fastest WiFi routers due to its powerful multi-band AD7200 support, the Netgear Nighthawk X10 R9000 is excellent for media streaming, particularly compatible with the Plex media server. With most routers delivering 802.11ac, this Netgear beast can perform so much more with 802.11ad that it requires the client to support the 60GHz band for seamless streaming and downloads that completes almost in an instant. You’ve seen 2.4GHz bands that can go up to 800Mbps, as well as 5.0GHz bands that sends 1733Mbps. But with a third band, being 60GHz and sending bandwidth up to 4600Mbps, you know you’re in for something fast.

While MU-MIMO can support streaming from multiple devices at the same time, Netgear enhances that technology with providing 160MHz to double the speed being sent to mobile devices such as smartphones and laptops. And for a maximum range of over 2,500 square feet, four antennas are working together to bring about signals that can accommodate every inch of your medium-sized home.

There’s more than enough confidence to what its wireless capabilities can do. But if you’re meticulous about speed and you need something even more reliable, especially for streaming that cannot fail, there are 6 Gigabit Ethernet LAN ports, along with a 10Gb enhanced small form factor pluggable (SFP+) port, a 2-LAN port that supports link aggregation for streaming 4K from a Network Attached Storage device.

And if all these features have astounded you to the fullest, you’ll even be more amazed to know that the Netgear Nighthawk X10 runs with a robust 1.7GHz quad-core processor, making it easy for the R9000 to accomplish all of its feats.

What makes the TP-Link Archer C5400 peculiar among other WiFi routers is its onboard antivirus provided by Trend Micro. HomeCare does not only provide protection against incoming viruses, but it also houses in parental controls and bandwidth prioritization (QoS), that’s excellent for users who’d like to shift their internet speed to streaming high-definition videos when needed. And because the router has MU-MIMO technology, you can stream across different devices not worrying whether your device would be interfering one another when it comes to bandwidth sharing.

When you’ve experienced strong signal coverage for 3 antennas commonly sold in the market, you’ll be curious as to what can be achieved with having eight dual-band antennas. The Archer C5400 performs well in larger homes with signals that strongly delivers performance in bedrooms, in backyards, and even in basements. To even enhanced your connection speed, Wave 2 Tri-band makes it possible for your devices to be connected with the fastest speed your internet service has to offer.

And there’s more to connection than just speed. The XStream architecture embedded in the router is designed to give its three bands the boost it needs by equipping each with co-processors for improved data handling and traffic management. And to even make this feature even more compelling, a 1.4GHz dual-core processor, the center of everything for the router, is taking care of everything for the Archer C5400 to achieve its well-recognized feats. It’s TP-Link’s main arsenal for giving streamers the power to seamlessly stream 4K videos, play online games, and listen to music streaming apps.

But that’s not all. If you want your WiFi router to be operated on the next level, you can utilize Amazon Alexa by configuring commands that can give you the flexibility to control it by voice while you’re doing entirely something else. 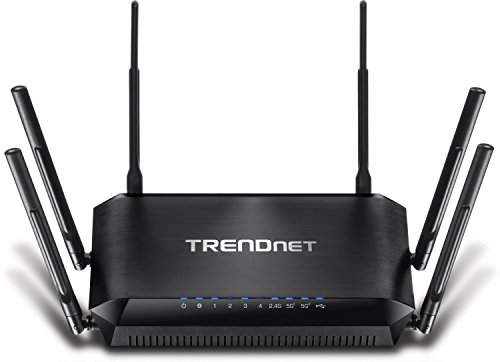 Performance with the TRENDnet TEW-828DRU is met through the deployment of three wireless networks, with a Wireless N band at 600Mbps, and two Wireless AC bands at 1300Mbps each. The best thing about having two Wireless AC bands is the fact that TRENDnet uses its Smart Connect technology in order to automatically allocate faster and slower AC devices to the two AC bands, placing priority to devices that need more bandwidth.

Perfect for busy homes, and in case your WiFi connections are too busy with so many devices connected already, you could have the option of connecting your TV, PC, or laptop to the router’s Gigabit connectors for seamless streaming. If you have guests and you don’t want them to access your network, you can create a Guest Network where they could use your internet service and not letting them into your shared devices or files. Parental Controls are also accessible to protect kids from surfing certain websites. And don’t worry about hackers as all of the bands in the router are pre-encrypted and protected for your safety.

With a 1GHz dual core processor optimizing network throughput of the TEW-828DRU, its six antennas are not just sending signals that can reach far places in the home, but signals are sent to where you are with Targeted Beamforming. 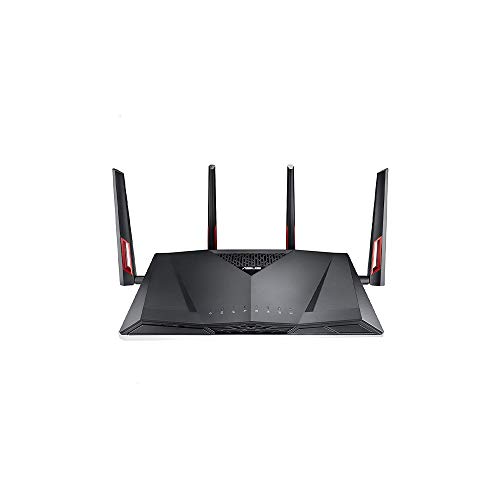 There are more powerful WiFi routers in Asus’ lineup, but the AC3100 Asus RT-AC88U is one of the most capable when it comes to providing a seamless experience with streaming 4K UHD videos. Thanks to the NitroQAM technology, you’ll be receiving combined speeds of up to 3167Mbps of WiFi speed for smooth and low-latency performance. A 1.4GHz dual core processor powers up all the router’s capabilities when it comes to speed and performance.

Even though the router is only dual-band, compared to other products that have tri-band support, the power in the bands are so great, that the 5GHz band can deliver 2100Mbps of bandwidth and the 2.4GHz band can max out speeds up to 1000Mbps. Those numbers are above industry standard being 80% and 66% faster than most competitor brands in the market. And even with a lesser number of antennas, having a 4-transfer 4-receive (4T4R) design, widest coverage spans about 5,000 square feet.

When it comes to utilizing the speed you’re sending to different devices, you can utilize Adaptive QoS for manually setting prioritization over peripherals where you want to bandwidth to be concentrated to. And for automatically allocating various connected gadgets to bands that make the most of traffic, Smart Connect has you covered. But if you want speeds that provides stability regardless of connection, you could use the 8 Gigabit LAN ports to have TVs, laptops, computers, and workstations experience full fidelity bandwidth. MU-MIMO is also included in the RT-AC88U avoiding congestion regardless of how many are connected to your network, avoiding delay to waiting for prioritization issues.

Of the five routers included in this review, many of them have similar technologies like MU-MIMO, multi-band support, and wired options that make the streaming experience great for visual-compulsive users. However, some of the considerations you might take note of are processor speeds, the number of bands and antennas that affect the distance and capability of long-distance signal sending, along with customizations that give you the power to allocate bandwidth to devices of your choice. Do also consider technologies that give you and your family a sense of safety and security.

Difference Between LCD And LED Monitors
11 Best Motherboards For NVIDIA GeForce RTX 2080 Ti
7 Best Intel Kaby Lake Laptops in 2020
8 Best RGB Motherboard in 2020
5 Best MMORPG Games for PC in 2020
How To Remove Thermal Paste
5 Best Wireless Mechanical Keyboard in 2020
How to know if a processor is failing and how to fix it [troubleshooting guide]
We will receive sales commission if you purchase items using our links. Learn More.
Copyright © 2020 EasyPCMod
[X]Close