There are different types of gamers when it comes to holding their mouse, and the claw grip gamers are known for their accuracy and stability. Because of their strategy and ability to play is characterized by their capacity to click buttons quickly and move swiftly with efficiency, they’re looking for a gaming mouse that could cater to their gaming specifications. In fact, certain manufacturers have already created gaming mice that can accommodate the peculiar grip, in the hopes of making the said gripping style accepted in the gaming community. And because there are many gaming mice out there that are created for different types of grip gamers, we have created the list of the best Claw Grip Mouse for Gaming this 2020 to narrow down the list for your shopping pleasure.

Get to know the performers, the perks, and the selling points of the best claw grip gaming mice in the market and see how each would fare for your gaming needs. 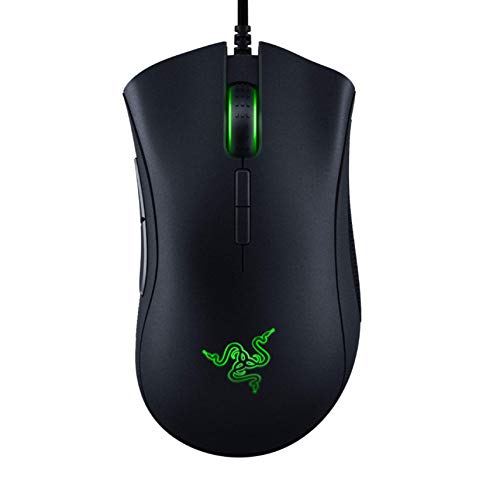 The Razer DeathAdder Elite is named to be not just a gaming mouse, but an eSports gaming mouse that’s intended for intense gameplay that demands performance that could keep up with the heat of the game!

The sensor can detect up to 16,000 DPI and can run as fast as 450 inches per second, which lets you speed up and slow down at will. The mouse sensor is so accurate that you’ll be able to land your point at powerful precision that’s 99.4% effective than others that perform less.

The DeathAdder adds extra death points to your competition as you experience power from within through Razer’s Mechanical Mouse Switches. What the switch from Omron does is that it enhances clicking response time to a minimum while the switch life is extended to last up to 50 million clicks.

Designed for right-handed players, the eSports gaming mouse from Razer offers ergonomics that are preferred by eSport athletes. Rubber side grips are positioned for your hands to give that hold and command for your mouse, even during tight and critical aspects of the game. The scroll wheel’s skin is made with small bumps to help you guide through your scrolling even when your eyes are fixated on the screen.

With the Razer Synapse enabled for the DeathAdder Elite, you can customize your gaming mouse; however, you want it. From lighting customizations to setting up the mouse’s 7 programmable buttons, and even modifying the steps in the sensitivity adjustment, the eSport mouse becomes an all-in-one weapon for claw grip players that aim for bringing out the best in their game. 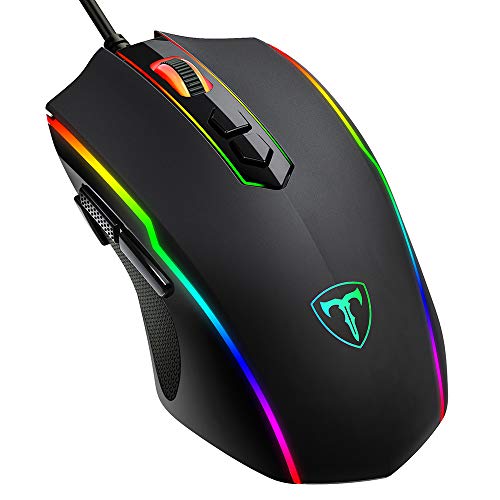 Though not a mainstream brand, the Pictek T16 Gaming Mouse is set to give gamers excellent performance that goes with the mood of the game. With buttons and keys configured to utilize efficiency and minimize movement, you could easily adjust cursor speeds and polling rates in a heartbeat. You could switch your DPI from as slow as 1200 for aiming up to 7200 when you need the speed for catching up to fast-paced gaming. Polling rates could also be set for 125Hz/250Hz/500Hz and 1000Hz to help you adapt to the needs of your play.

Intended to be used by claw grip gamers, the T16’s symmetrical and curved design is set for long-term use while minimizing fatigue commonly caused by curvature issues and poor finishing. Aside from design, the gaming mouse is also lathered with a top finish that’s anti-fingerprint and sweat-resistant. These features assure that nothing slips while stuck at the highlight of the game.

As for customization, the Pictek T16 has an Easy-to-Program Gaming Software that lets you customize the 8 programmable buttons, and even the Rapid-Fire button that’s not commonly found among leading gaming mouse brands. The gaming mouse’s lighting can also be modified through the software, where you could choose over 16.8 million colors and set color transition styles that fits your mood. Interesting, however, that it’s only in the T16 where you could turn off the lighting with the flick of a switch – a feature that’s also peculiar but very personable. 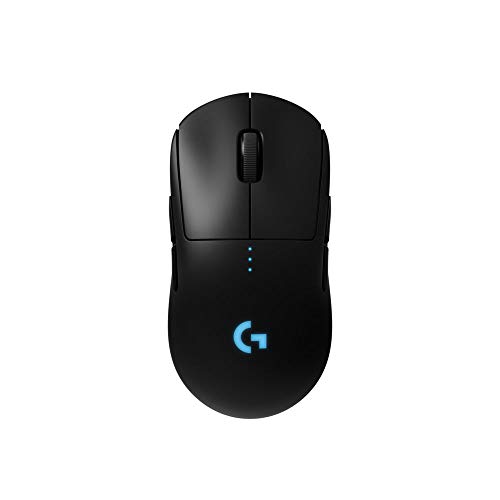 The Logitech G Pro Wireless aims to be the last gaming mouse you’ll use as it’s created with the engineering to help you win every game!

For starters, it carries a sensor called the Hero 16K, which helps gamers perform at their best whether the demand is great for aiming slow or moving fast. Regardless of sensitivity, whether going from 100 to 16,000 DPI, the G Pro Wireless can handle clicks and movements, even over 400 IPS, without drawbacks. Though the numbers are great, it’s surprising to know that the new sensor consumes 10x less power than many prototypes.

The claw grip gaming mouse from Logitech is also wireless, a valuable requirement for gamers who are focused on gameplay and less on distractions. But more than wireless, Logitech also deployed its Lightspeed technology that provides performance and response as fast as 1 microsecond – as if a cord connects your gaming mouse.

To achieve moving prowess, the G Pro Wireless made itself almost weightless at only 80 grams, with an outer shell that’s only 1mm thin. It gets even lighter with an advanced LiPo battery that can provide long-staying power without the massive weight.

With the Logitech Gaming System, customizing its 4 to 8 buttons, along with its lights, are a cinch. You could even remove side buttons or place them on either left or right – making the G Pro Wireless truly ambidextrous and friendly for any user.

Because the Logitech G Pro Wireless holds true to its statement of being the last mouse you’ll use, it has been created to endure everyday use and abuse that’s catered for rigorous gamers. With a rubber textured outer skin, claw grip players would find the mouse an excellent asset for their tough gaming. The mouse feet can withstand over 250km of travel, and the buttons can endure 50 million clicks. 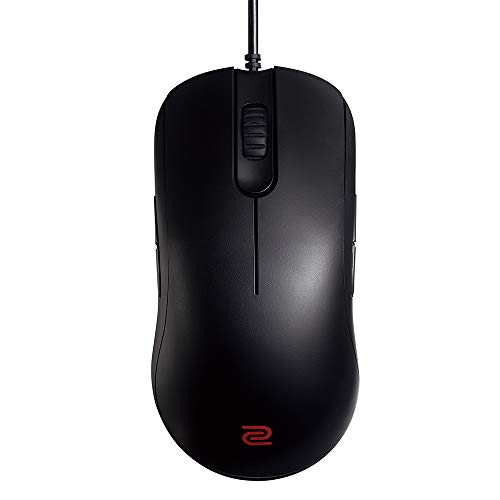 One problem with specific gaming mouse is that it can only cater one-side handed players, which is a total letdown. That’s where the BenQ Zowie FK comes in. There are two thumb buttons placed on both the left and right sides of the mouse so that it could cater to both left and right dexterity players, especially when configured within BenQ’s gaming system.

It’s also designed for plug and play and does not need additional software to download to use the gaming mouse in both Windows and Mac operating systems. Catered to both claw and palm grip users, the Zowie FK is designed to fit various hand sizes. This is why the Zowie is sold in the FK1, the FK1+, and the FK2, which differ in weight and overall body measurement.

For movement speed, you could easily switch between four speed modes, particularly in 400/800/1600 and 3200 DPI. Now that may not be as flashy compared to other gaming mice, but with robust performance and an adjustable report rate that goes to as fast as 1000MHz, it’s a pretty decent buy.

The BenQ Zowie FK is connected to the computer via a USB cable that’s 6.6 feet or 2 meters long. 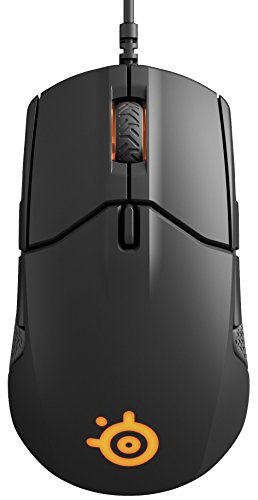 The Steelseries Sensei 310 claims a gaming sensor that’s above anything seen from any gaming mouse. It utilizes a system called the TrueMove3, which comes at only 350 IPS and 12,000 CPI – statistics that’s considered median compared to other performing gaming mouse. However, the 1 to 1 tracking is something that’s unexpected as industry standard introduced mouse movement based on decreasing latency, increasing speed, and optimizing transfer report. But because the movement made with the Sensei 310 reflects the motion made from mouse to monitor, there’s no room for latency, interpolation, nor jitter.

Material is one of the defining characteristics of the Sensei 310 from the frame to the grips, down to the finish. The frame of the gaming mouse is made with fiber-reinforced plastic that’s both tough and light. Grips are of pure silicon that’s virtually weightless, yet feels soft and grippy to the touch. Lastly, the finish of the mouse is fingerprint resistant, coated with a semi-matte finish. Having all these features makes the Steelseries gaming mouse as light as 92.1 grams.

The design is also ambidextrous and caters to any kind of gamer, whether they are into claw grip or fingertip grip left or right-handed. Also, the switches are separated from the mainframe so that the force of the click can be felt dedicatedly on the buttons clicked, and not on the whole thing.

To make everything convenient for you, especially when you’re saving settings for mouse button configuration suitable for 9 buttons, the Sensei has a gaming mouse engine where you could keep CPI sensitivity options, lighting RGB effects, polling rate, and action buttons. 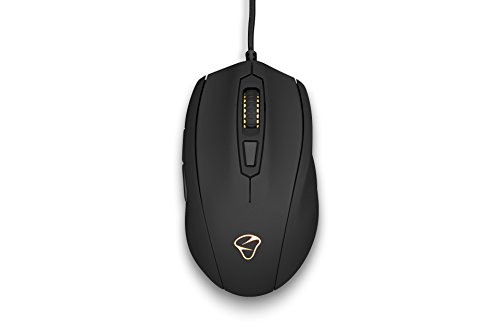 When you’re into feeling the gaming mouse to fit exactly on your right hand, the Mionix Castor can fill in the gap between the game and the user. With an award-winning shape that’s created to become a staple for gamers across different grip types, the Castor can be wielded with comfort that’s all about dimensions and ergonomics. The design is so thought-of that there’s a pinky and ring-finger support groove, that enables low sensitivity FPS gaming come with ease.

Weighing at 99 grams, and looking as tad simple, the Mionix black mouse lets you experience gaming with the right amount of drag that’s adaptable for any game. With 5000 native DPI optical sensor and an adjustable DPI-setting that can be configured in 50 steps, you’re on top of your game, and a commander at your own gaming pace.

Customize the 6 buttons in your Mionix Castor gaming mouse, along with the sensor and RGB lighting using the Mionix HUB. And with the mouse attached to the USB hub via a gaming cable, you can maximize that 1ms latency with nothing to hold you back. 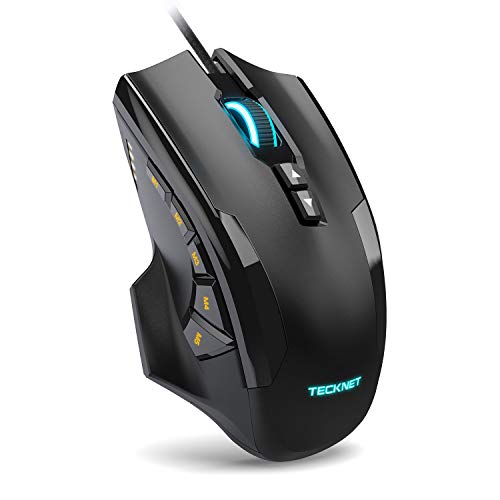 The TeckNet M009 HyperTrak can provide a fantastic gaming experience, performing at par against staple gaming mouse manufacturers. In fact, the M009 operates 8 times faster than the average mouse with a report rate at only 1 microsecond – a standard to most gaming mice these days.

Another eye-popping detail is that the HyperTrak mouse is equipped with an Avago ADNS-9800+ sensor that can give users a run for their money. It comes with zero smoothing, legless filtering, and flowing acceleration for tracking that’s dependable and responsive regardless of DPI speeds between 250 and 16,400 DPI.

Despite that the TeckNet gaming mouse has the appearance of being light, its weight can be customized with 6 pieces of 4-gram removable tuners that address the need for a gaming mouse that can limit flying mouse cursor speeds.

In case you need to use your M009 HyperTrak mouse on a different terminal, you can still wield your settings thanks to an onboard memory that lets you save your configurations without the need for software.

And with the TeckNet Gaming Software, you could set the macros on the 10 programmable buttons, along with choosing among the 16.8 million colors for the lighting RGB and adding transition effects, and the DPI speed switches that can go to 16,400 from the default 4000 DPI.

The most Claw Grip Mouse for Gaming

Claw Grip Mouse for Gaming users are very tactile and agile gamers, and they aim for a mouse that sticks to them no matter the tension or motion in the game. A non-slip top finish helps a lot in ensuring that grip stays firm, even when getting sweaty or shaky.

Speed is essential as it’s a factor that determines the endgame, especially when moving fast is a requirement, such as in playing FPS games like Fortnite or PUBG. A speed switch is also valuable, specifically when sniping down or moving up. The ability to customize buttons is also a requirement as each game is differently configured from the other.

Lastly, the need for personalization should be a prerequisite as it’s yours to use and deploy at any game, in any tournament, on any gaming situation.