Recently, most laptop manufacturing companies have shifted focus to provide enterprise systems for the office worker. The Chromebook devices make use of Google’s Chrome OS to make things simpler for users of office tools. This Acer Chromebook Spin 13 is one such laptop. The unique thing about this model is the fact that it can be used as a laptop as well as a tablet.  The 360-degree rotational features make it one of the most convenient Chromebooks in the market right now. Also, it comes with a sleek design that makes it very stylish.

If you’re looking for the right Chromebook for your multitasking needs, let’s find out whether this model is right for you. We will look at its specification, performance, design, and other features the Chromebook posses. 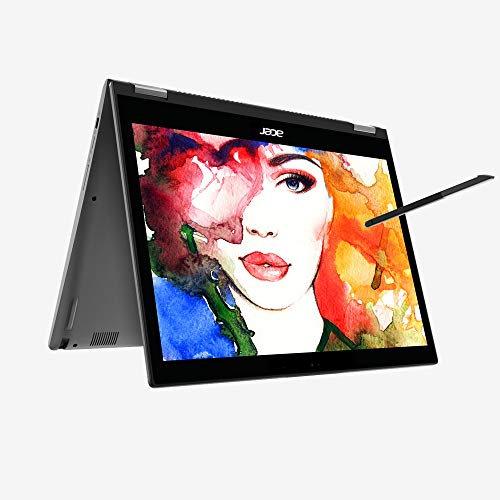 When it comes to performance, Acer Chromebook spin 13 is a super machine. It uses the Intel Core 15-8250U processor. Of course, it’s an 8th gen processor with four hyper-threaded cores. The speed of this Chromebook is another talking point of the laptop.

It has basic speed of 1.4GHz but can reach a maximum speed of 3.4GHz. Chromebook Spin 13 comes with 100GB of cloud space 128GB SSD, and 8GB memory. You are not going to run out of storage space easily. Again, the Chromebook spin 13 is the master of multitasking. That’s the main focus of the product. The Chromebook has been tested for performance, and it passed these tests in flying colors. The Acer model can run everything, including work tools such as Photoshop Express and Microsoft word. It is also strong enough to play several basic games like Asphalt 9 and Mario Kart.

The system is pretty fast, as it can load multiple browsers at a time. If you are browsing the web and doing several things at the same time, you will need a system that’s designed for multitasking. Fortunately, the Chromebook spin 13 is built for that.  The performance is great for a system that’s more affordable than some other expensive options with similar features. With battery capacity that lasts for up 10 hours, you will know you are getting a great bargain.

However, the Chromebook is not silent. There’s a little fan noise from the system, especially when you are working in a relatively quiet place. This is common among most systems. The fan noise is something you can cope with because it’s not loud. Actually, you may not even hear the noise if your working environment is not very quiet. So, the noise is not really bad. Getting around its operating system is pretty easy. Those who are familiar with smartphone or android tablet can be able to get themselves up to speed in a short time. The Chromebook has a familiar notification center as well as the usual android features. You’ve got all of that in this Acer Chromebook.

You will be embarrassed with a plethora of apps and software you can get from Google Playstore. And those dealing with office tools will have enough business applications that can help them work effectively. With all these features, you may be wondering whether the laptop has any limitations. Yes, it does have, but that’s not the fault of the Acer brand. The limitation is from Chrome OS.

There is no denying the fact that this Acer model is a properly designed Chromebook. The body is built with anodized aluminum. It feels and looks impressive, with neat touches like brighter hinges and beveled edges.

Chromebook Spin 13 is designed with durable and robust metal, yet it does not make it look heavy. The design does not look cheap. It is the type of Chromebook that can stand the test of time. Also, apart from being durable and robust, the design is also fashionable. The screen has a 360-degree rotational feature that can help you easily convert the Chromebook to a tablet. This is the standout feature of the laptop. Whether you’re watching a movie, designing a logo, or working on Office Suite, this Chromebook is properly built to make your work easier.

At the edge of the Chromebook, there is a space for 2 USB ports you can use to charge the system. Also, there are volume rockers, an audio jack, a MicroSD card slot, and a USB 3 connector. These selections of ports will help you connect to anything. However, on a negative note, the Chromebook does not come with HDMI output or an extra USB port.

This Chromebook is 17mm thick and weighs around 3.5 lbs. It may be a bit larger than most other types of Chromebook models, but this one is still portable.  And the extra size could make it look a bit awkward to use it in its tablet mode. That’s the only issue we’ve found about this Chromebook. Every other feature about the design fit well with the Chromebook.

Acer has made a lot of improvements in the display features of this Chromebook. It is a bit different from others, which makes it unique. The 13.5 inches panel has a 4:3 aspect ratio, making it look a bit broader than other Chromebooks with 16:9 widescreen displays.

The display is perfect for web browsing and for using office tools. With the additional vertical space, it will be a lot more convenient to view webpages and deal with productivity tools. However, the display is not the best for streaming or watching movies. Since many movies and TV shows are created in the 16:9 aspect ratio, the system is likely going to leave extra black bars at both ends of the screen. This will largely affect your viewing experience.

But since the Chromebook version of Acer is meant for enterprise use, you will enjoy it when you make use of the Chromebook for its rightful purpose. So, unless you will be watching movies very often with this Chromebook, the aspect ratio will not matter too much for you. With a screen resolution of 2256 x 1504, the screen looks crisp as it matches well with the 1080p panel. It is sharper and comes with a great color combination anyone would love. The stylus feature will work fine when drawing or designing.

It has a contrast level of 1523:1. This gives it enough punch and vibrancy. Besides, this Chromebook has a brightness level of 353cd/m2, which is ideal for office tasks, whether indoors or outdoors. For games, media, graphical work, or web browsing, this Chromebook is quite powerful and efficient. The aspect ratio, quality, and good resolution make it better than some other laptop displays. The in-built speakers, although not too loud, are impressive. However, the fact they are placed beneath the laptop makes them a bit low in performance. It gives the Chromebook a muffled sound when you place the laptop on the desk. The Chiclet unit keyboard is relatively soft on the fingers but very durable. It comes with moderate travel designed to offer the best typing experience.

Another solid feature of the Chromebook is the trackpad. It comes with built-in buttons that are snappy and fast. It also has a good surface with nice gesture support. However, remember that the keyboard does not have a function row or number pad. This may not be considered an important feature because so many users may not even find it necessary for certain tasks.

If you are going to use the Chromebook spin 13 for several hours, you will enjoy its battery life. This Chromebook can give you up to 10 hours of uninterrupted system activity when there is no power supply. That’s impressive when you compare the battery life against other models that can’t provide up to 6 hours.

We’ve discussed the most important features of the Acer Chromebook spin 13, but some less important features may be relevant to some users. The system comes with a volume rocker on the right side of the Chromebook. It has 802.11ac wireless connectivity, which is expected from an Intel processor.

The Acer body may not seem too fashionable like other Chromebook models, but it delivers in terms of performance. Also, the ability to write and draw on the screen with the pen is another advantage of the system. Its touchscreen feature is simply impressive because it’s responsive.

The brightness, sharpness, general contrast, and touch response are the major highlights of the Acer Chromebook 13. They give the laptop the quality it deserves. In terms of cost, this Chromebook is relatively competitive for the price. Apart from the absence of HDMI, it comes with every other port and connecting capabilities. If you’re looking for an affordable Chromebook option for office use, this model is certainly up there as one of the best.

Chromebooks are specially designed to offer office workers robust features for their multitasking needs. There are several brands in the market, but the Acer Chromebook spin 13 comes in as one of the best. It’s and 8th generation Chromebook with lots of good features for office use.

The Chromebook Spin 13 is properly designed with an aluminum construction to offer both style and durability. With strong memory and a battery that lasts for 10 hours, the system tries to stay very efficient for any task. It comes with the right features. The design is also durable. From the features we have mentioned above, it’s okay to say this Chromebook is a top-quality model that won’t disappoint.

The following are answers to the most commonly asked questions about Acer Chromebook Spin 13.

Which is the best Chromebook to buy?

Can I use Chromebook to run office packages?

Yes, that’s one of the main purposes of Chromebooks. They are impressive for doing all types of office jobs.

Does the battery of Acer Chromebook Spin 13 last long?

Yes, a 10-hour battery lifespan before a charge is certainly impressive in the industry

Is the Chromebook Spin 13 worth it?

If you’re looking for a nice office laptop that’s affordable and effective, the Chromebook Spin 13 will be a great bargain.

Is Acer a good Chromebook?

Yes, Acer is a decent Chromebook for those looking for a longer battery lifespan. Also, the product is highly competitive in the market when it comes to cost.

What is the warranty status of Chromebooks?

Generally, Chromebooks can last for a minimum of 5 years.

Are Chromebooks better than laptops?

Does Chromebook work with antivirus?

No, unlike windows, Chromebook does not get hit by antivirus. So, they don’t require antivirus software.

Between windows 10 and Chrome OS, which is better?