If you’re used to the high-end laptops that offer superior performance, you would wonder how a Chromebook model would be useful to you. But after carrying out a series of tests on the Dell Inspiron Chromebook 2-in-1, we are sure you will love everything about it. It may not have some premium features, but when it comes to speed and performance, it surely delivers. Moreover, this Chromebook is one of the most affordable you will ever come across. But take nothing away from its performance for multitasking. The Chromebook is undoubtedly worth considering.

However, it does have some little flaws, just like every other laptop. We are going to look at the features of the Dell Inspiron Chromebook 2-in-1, considering its benefits as well as its flaws. 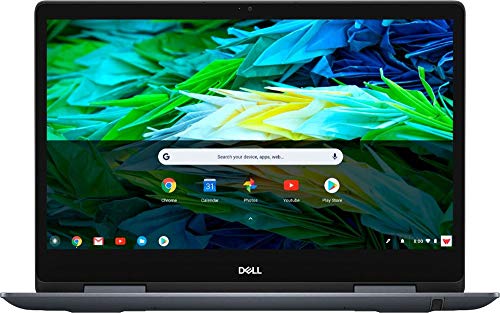 Inspiron 7486 comes with 4GB of RAM, which is the basic level going by PC standards. However, when it comes to Chromebooks, the RAM size is a top-end feature. Remember that windows OS is more demanding than Google’s Chrome OS. So, the 4GB will be enough for whatever basic tasks you want to do with the laptop. The Inspiron 7486 is equipped with a high-performance Intel Core i3-8130U processor. That’s the much you can get for a Chromebook. If we are talking about speed, the laptop is quite impressive.

When streaming videos from Amazon and browsing multiple Chrome tabs, the Inspiron is relatively fast. It’s the king of multitasking because you can do a whole lot of things with the laptop without slightly slowing the system down. Whatever apps you want to use, they open almost immediately. It has enough space and speed to give you precisely what you need when working on the system.

The boot time is also short. Starting your system from scratch will not take you more than 6 seconds. You wouldn’t get any Chromebook that is as fast as this one when it comes to boot time.

The Dell Inspiron may not be equipped with so many customization options, but the only two options (64GB storage and 32GB storage) are well worth their value. Another critical reason to settle for this laptop is a compact and portable body. The sleek design makes it a good system as it can be easily carried in a bag. But for its small size, it is a bit heavy at 3.9 pounds. Because of its weight, we may not call it an entirely attractive device. Yes, it has a beautiful design, but there are some other Chromebooks with much better designs than this model. Where this Dell Inspiron scores a higher mark is in performance.

That is where it has made its mark. There are other impressive features of the Chromebook too. The rounded edges and textured keyboard combined to make the laptop an admirable one. Overall, the performance level in this machine will be too much for you. It will even keep an extra gear in case you want to add some types of games to your activities.

Chromebooks are known for their battery strength, and this one is no different. Our complete test on the battery shows it can last for up to 10 hours when running basic programs.  The time should be enough for whatever office work you have until you can charge the battery again.

With the strength of the battery, the system will come in handy in case you are traveling where you won’t be charging more often. Ten hours is undoubtedly enough for working on your system when using office tools.

And the fact that the screen drains too much power from the battery makes the 10-hour battery strength even more impressive.

As it is with all 2-in-1 flip laptops, this model has a sleek design and a beautiful appearance. The lid and chassis of this Inspiron 7486 are flexible, which is very necessary for durability. The display does not have a borderless design, although there are some spaces around the edges of the laptop to protect the fingers while typing on the keyboard. It’s a convenient feature that gives your fingers a breathing space when typing for a long period. It measures 0.7x13x9.1 inches, which is normal for a convertible laptop of this size. Everything concerning the design was built to provide convenience for the user.

Also, it comes with a large bezel that provides enough space for the HD webcam to position right above the display. It is a small sensor camera that brims under a low-light condition. This means you will also get bright pictures even when you take snapshots at night. The double 3600 hinges are a bit stiff but they still operate smoothly.

Another flaw is the fact that you need to buy an additional adapter that will convert the USB Type-C to HDMI or DisplayPort. It doesn’t have an HDMI port, which would have been better for the Chromebook. These are some of the flaws that are noticeable in the Chromebook. There is a stylus pen included in the system to help users draw or write straight on the display screen. However, it’s located at a delicate place at the front edge of the Chromebook. So, you have to be careful when removing the pen to avoid snapping it.

Its EMR technology makes it work without batteries, so you don’t need to bother about charging the pen before using. This is far better than other pens that use AES or N-Trig technologies.

Another feature of this Chromebook is the 1920 x 1080 full HD resolution touch screen. The 100 percent page zoom and medium text size will surely be comfortable on your eyes. Also, the panel’s IPS technology provides wide viewing angles. This feature is very rare, and most Chromebooks don’t have this feature. That’s an added plus for the Dell Inspiron Chromebook 2-in-1.

The screen has a 260-nit brightness, which is bright when working in a daylit room. But the shiny, glassy screen could draw ambient light, especially when working outdoors. This is not a huge problem since you will be using the laptop most times in an enclosed environment like the office or the room.

The keyboard of this Chrome comes with good space between the keys. This is the latest design in notebook keyboards as it allows for effective typing without many mistakes. Although it comes with a low key-travel,  it steel feels good and comfortable to type on. And the backlighting feature takeaway guesswork from tasks, especially when working in low light environments.

The keys feel soft and light on the fingers. If you are a heavy keyboard user, you will love how comfortable and responsive they feel. Even when you type for several hours, your fingers won’t feel any strain.

However, you will need a bit of time to master the key layout since it’s a bit different from the key layout in Windows systems. To help you with that, there is a small lesson about the key layout immediately after you power on the system. This should help you get along until you are very familiar with the layout.

However, the keyboard has a stiff clicking action and a bit loud clicks, which is the only negative thing about the Chromebook’s touchpad. If you want to keep the touchpad quiet, you can use the EMR pen, touch the display, or tap to click

The Inspiron comes with dual speakers that are loud for personal listening. However, the location of the speakers underneath the palm rest could lead to a muffled sound. It would have been better if the speakers were located at a more open place to enjoy every bit of the sound.

The Dell Inspiron Chromebook is one of the latest models of Chromebooks with a sleek built but powerful performance. It may not be up there as one of the best for Pc users. However, those looking to buy a sold and well-built Chromebook may not find a better option.

As an 8th generation Chromebook with an Intel i3 graphics, it is relatively fast and maintains a high level of performance. Plus the Chromebook is a convertible one. You can use it as a laptop or as a tablet.

Between a laptop and a Chromebook, which is better?

The Chromebook is quite different from the laptop in many ways. But the most important difference is that Chromebooks are specifically designed for office, business, and personal use.

Also, they are more affordable than laptops. It uses Google’s Chrome OS instead of macOS or windows 10. So, if you want a cheaper system that can do basic things, a Chromebook is the answer. However, graphics designers and gaming expert would not find a Chromebook too valuable.

Can my Chromebook get a virus?

Unlike Windows laptops, the configuration of Chromebooks makes them resistant to viruses. This is because each Chrome app and web page run in their virtual box, which is difficult for viruses to penetrate all aspects of the computer.  So, Chromebooks are not susceptible to virus attacks.

Which is the best Chromebook to buy?

There is no particular Chromebook we can term the best because they all have their unique feature. But there are few great options such as the Acer spin 13 Chromebook, Dell Inspiron Chromebook, as well as the Asus C434 flip Chromebook.

Will my Chromebook be safe for online banking?

Is there any disadvantage of using a Chromebook?

Yes just like anything else, there are some flaws with Chromebooks?

It’s a lot more difficult to access apps when you’re not connected online. Secondly, they have limited functionality.

Is it possible to print in a Chromebook?

Yes, you can do a whole lot with a Chromebook, which include printing. Of course, you need to connect the Chromebook to an external printer. Other printing instructions are simple to follow.

Do Chromebooks have hard drives?

No, they are not equipped with hard drives. But they have their unique storage system known as SSD. The storage system is a new one, and many laptop manufacturers have started using this storage method.

What benefits does a Chromebook have?

There are quite a lot. First, they are very affordable and come with longer battery life. Also, they have fast boot times because of their high-performance processors.

Is it possible for Chromebooks to get hacked?

Hacking the Chromebook is almost impossible because most windows attack won’t work in Chromebooks. The configuration method of the Chromebook makes it very difficult to hack.

Does Word work on a Chromebook?

Yes, it’s possible to use Word on a Chromebook.

Do Chromebooks have a firewall?

Yes, Chromebooks have customised firewall within the system that shields it against external attacks. It also protects the computer when the Chromebook is accessing other networks.

Can Chrome OS be installed on a laptop?

No, it’s not possible to install the operating system of Chrome on a normal laptop as you would do with Linux and Windows. The only installation that could work is installing Chromium OS.