For a time, Android users may have thought that the Android tablet market is dead. Considering how long it has been since any innovative new model was made by one of the major players, nobody could blame them. However, a few surprises still managed to emerge in the last several months, one in the form of Galaxy Tab S6, and the other being Microsoft’s Surface Pro 7.

With two new additions, many who were looking to refresh their tech gear might be wondering which one to go for, and which one is better. That is what we will try to determine today, so if you are interested in any one of these models or their comparison, you have come to the right place. 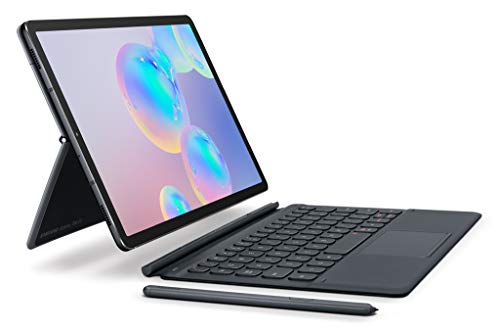 Galaxy Tab S6 comes as Android’s latest flagship product, and as far as anyone can tell, the model has quite a lot going for it. It is fast, loud, and it has a beautiful, modern design. On top of that, it features an integrated S Pen charging. However, while all of these features are quite nice to have, they are not what makes it stand out.

No, the reason why this model is so impressive is its DeX UI, as well as an entirely new keyboard, which makes it not only a great tablet but also a competent alternative to a fair number of laptops.

Let’s start with this model’s design — it features a metal chassis, which makes it look very modern and also quite beautiful. It also features a magnetic slot on the back, where the S pen can be stored and where the tablet can be charged. One minor flaw, however, is that if you want to use it as a laptop, you must attach a separate cover. The problem is that if you don’t secure it good enough, it might pop off when you increase the kickstand.

In terms of ports, the model is relatively well-equipped, although it lacks a headphone jack, which could be a problem for those who do not use wireless headphones. It also has a MicroSD slot and USB-C, but that’s about it.

Its display is quite satisfying, with 10.5 inches and 2560×1600. Also, as expected from a tablet, it is a touch screen. While it has a keyboard that you can attach, as mentioned, it is not a very good one. It feels cramped, and it features keys that are a bit too small. It is not especially bad, either, but it is not very likely to impress a lot of people.

Under the hood, it features Qualcomm Snapdragon 855 SoC, which is a significant improvement over the chip featured in Tab S4, although there are better options out there, such as Intel’s U-Series processors. Meanwhile, its battery life is okay, lasting for about 9 hours, although we have seen tablets that last longer. However, this model is stronger than most of those that can last multiple hours more, though, so it makes sense.

As for the system, it runs Android 9.0 in tablet mode, and it uses DeX when you attach a keyboard to it. This makes for good multitasking, which is why we said that it is a decent alternative for a laptop. Finally, Galaxy Tab S6 also comes in two versions — the base model which features 6GB RAM, 128GB of storage, and a Snapdragon 855 CPU. The second version offers storage that is doubled in size, but the price is around $80 larger, as well. However, if you want the optional Book Cover keyboard, you will have to pay extra for it, as well.

Now, let’s take a look at what Microsoft’s new Surface Pro 7 has to offer. Unfortunately, the Surface Pro line did not see many changes over the years. Of course, with every new generation, the company improved the initial specs, and the design saw minor changes, but nothing drastic was implemented. This is also the case with Surface Pro 7, which is quite similar to its predecessor, apart from one significant change — it now finally has USB-C port.

In terms of design, it looks somewhat similar to the Surface Pro 6, as mentioned before. It looks almost identical, and it features pretty much the same dimensions, with the new USB port being the only real difference. The bezels are still a bit chunky, although the frame is well-built and sturdy, and the kickstand is excellent, as in previous models.

For some reason, Microsoft decided to bring back Core i3 with 128GB of storage and 4GB of RAM for this model, which is a bit of a step back. It also has two other models, with Intel Core i5 and i7, however, which also come with more RAM and higher storage, although they also cost more.

In terms of connectivity, the new USB-C is a significant improvement, especially since it comes in addition to USB-A, a 3.5mm headphone jack, and Surface Connect. Meanwhile, the display is still 12.3 inches, with a 2736×1824 touchscreen, and 267 PPI.

It has a pretty good keyboard cover for a tablet, however, but it still comes as a separate accessory. And, while the build is reliable, but its battery life is not as good as its predecessor’s. Surface Pro 6 managed to last for as long as 13-15 hours, whereas Surface Pro 7 only lasted for around 8 hours during tests, while Microsoft’s estimate puts it at 10.

The model also features improved microphones, which is a small but welcome change, which might make the device easier to hear you as you make your requests to Cortana, or use it for communication during conference calls and alike.

Surface Pen also comes with a few new features which may allow for easier document editing, which has seen improvement, as well.

In the end, you could say that the model is decent, and it is functional enough to be used. However, these days, simply being functional might not be enough for a lot of people. There is certainly still room for improvement, especially when it comes to battery life, an outdated design, and the base model’s specs. The base price is lower than that of Surface Pro 6, although the older model had better RAM, storage, and CPU, which makes the higher price quite understandable.

So, now that we have seen both devices let’s take a look at how they might compare. In terms of design, we liked Samsung’s model better. It looks modern and different from what we have seen before, whereas if you have seen one Surface Pro model — you have pretty much seen them all.

Surface Pro did win in terms of connectivity, especially with the addition of a new USB-C port, while Galaxy Tab S6 barely has any options, and it even lacks a headphone jack. Surface Pro also has a more beautiful keyboard, improved microphone, and a larger screen — all of which are welcome improvements if you wish to use it as a tablet AND a laptop.

Surface Pro 7 is also a bit more expensive than Galaxy Tab S6, although not that much to make it a significant difference. Samsung’s base model features a slightly longer battery lifespan, however, as well as marginally better specs when it comes to the base model, which is also worth keeping in mind, for those who do not want to pay extra for upgraded versions of Pro 7.

At the end, which model is better? Well, as we have seen, they are relatively similar in a lot of different ways, although there are some areas where one is better than the other. In the end, you need to make a choice, and it will depend on what you are looking for in a device.

It also depends on whether you would be satisfied with a base model or if you wish to go all out and buy the best version of any of the two. You might argue that Samsung’s Galaxy Tab S6 is slightly better aesthetically and specs-wise, although it has its shortcomings, as we have discussed previously.

Neither of the two is bad, which should be taken as a fact, but Microsoft’s model feels like the last attempt to launch a model before moving on to more exciting products, which may arrive in a short or distant future. After all, laptops and tablets are getting smaller, thinner, and lighter, so Surface Pro line risks of getting outdated rather quickly, if Microsoft doesn’t include a major change as soon as possible.