Several affordable laptops would not give you exactly the type of features you are looking for. But Chromebook 3 and Chromebook 4 are not in that category. They are affordable but come parked with top features that make them highly demanded in the market. Making your choice between one of Samsung Chromebook 3 vs 4 could be a bit tricky considering their similarities. Fortunately, that’s the reason why we are here.

Both the Chromebook 3 and 4 come with impressive designs, but it seems Chromebook 4 is much better in that area.

Although the Chromebook 3 is made of plastic, its build quality is surprisingly good. The silky-smooth palm rest at the chassis adds more vibe, while the softly rounded lip keeps the wrists comfortable when typing for a long time.

It comes with a textured “metallic black,” making it look classy.  However, the keyboard doesn’t come with a flexing, which is common with laptops within this price range.

But one impressive feature about this Chromebook is its portability. It’s lightweight and small enough to easily tuck under your arm or keep in your bag when traveling.

Weighing about 2.56 pounds and measuring 11.4 x 8 x 0.7, this Samsung Chromebook 3 looks exactly like the HP stream, although with a different operating system.

However, the Samsung Chromebook 4 comes with silver hue and curved edges. It has a striking resemblance to Macbooks due to its aluminum top design. When it comes to design, this Chromebook 4 feels stronger than Chromebook 3 in every aspect. The system has a chunky display bezel, which makes it have a sort of old design.

At 3.7 pounds, it’s heavier than the Chromebook 3 but thinner and lighter than many other types of laptops. So, despite its slightly heavier weight compared to Chromebook 3, the Chromebook 4 still manages to stay relatively portable.

One of the exceptional features of both the Samsung Chromebook 3 and 4 is the impressive screen. Chromebook 3 has 1366 x 768 display and its 259 nits are certainly bright for a relatively affordable laptop.

In fact, the colors of this Chromebook 3 make other low-budget laptops very inferior, because it competes favorably with high-end laptops in this area. It shows a subtle hint of brackish green and yellow sand makes everything look cool. In terms of display, both the Chromebook 3 and 4 deliver warmer tones that look more detailed and authentic.

And just like Chromebook 3, Chromebook 4 has an 11.6-inch screen. Both do not have a touchscreen, which may be a turnoff for those looking for more simplicity.

But in terms of brightness, both Chromebooks are brighter than many other options, which make them suitable for outdoor use.

In terms of performance, you will have features that are better than what is obtainable in most budget-friendly laptops.

Both come installed with Intel processors with 4GB RAM and 1.6GHz. However, while Chromebook 3 is equipped with 16GB of eMMC flash storage, Chromebook 4 has up to 64 GB storage. That’s the major difference between these two.

When we tested both of them by opening 10 taps, none showed any lag or delay. However, Chromebook 4 was able to maintain its speed when we ran multiple programs at the same time.

When it comes to performance, Chromebook 4 certainly has an edge, which is the reason why it’s more expensive.

While Chromebook 3 claims the laptop has a battery strength of 11 hours, Chromebook 4 says its battery lasts for 12.5 hours.

But when we tested both of them by browsing online with 4 taps, Chromebook 3 was able to last for 8 hours while Chromebook 4 stayed longer for 9 hours.

From our test, if you’re using the laptop normally without several tabs and programs simultaneously, both laptops can last throughout your workday, although Chromebook 4 is slightly better. In that case, you don’t need to carry a charger along with you if the laptop is fully charged.

There are enough ports in Chromebook 3 for whatever type of connection you want. On the right side, there is a microphone jack and a USB 3.0 port.

On the left side, there is a MicroSD card slot, HDMI port, a USB 2.0 port, a slim jack adapter, as well as a battery indicator.

The Chromebook 4 also comes with several connecting features. It has a headphone jack, microSD reader, and USB-C port on the left.

There’s USB 3.0 port and security lock on the right side of this Chromebook. The system has been tested in several ways and passed all the tests, including humidity test, high temperatures, vibration, as well as a transit drop test.

The following are the answers to some of the most common questions about Samsung Chromebook 3 vs 4: 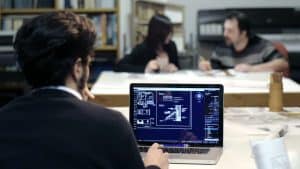