It has been only a week since Microsoft launched its Surface Pro 7, a 2-in-1 laptop, which many have started considering the main competition to Apple’s iPad Pro.  Today, however, we are interested in seeing how do these two compare and which one might be a better option between Surface Pro 7 vs. iPad Pro for users in 2022.

The iPad Pro saw the launch in 2018, but even so, it remains one of the most popular and most used recent pieces from Apple’s collection.

Can Apple’s last year’s product still come out on top, or is Microsoft going to take over the market with the new model from the Surface Pro series? Let’s see.

As Microsoft users likely know, Surface Pro 7 was announced only a few weeks before its release, with both events happening in October 2019. Since it came out, it attracted the attention of a lot of people, although many did not see much difference between this model and its predecessor, Surface Pro 6.

The differences are there, although they are only minor ones. For example, Surface Pro 7 finally has USB-C port — a feature that users have been asking for for years. In terms of design, the critics are right — it looks pretty much the same as the previous model.

The two models are also the same in terms of storage (128GB/256GB/512GB/1TB SSD), as well as RAM, although the new model has 3 versions (4GB, 8B, 16GB) while the previous one only had two (8Gb and 16GB). Now, in terms of ports, Surface Pro 7 offers the mentioned USB-C, Surface Connect, Surface Type Cover port, a 3.5mm headphone jack, MicroSDXC, and a USB-A port. In addition to that, it supports Wi-Fi 6 and Bluetooth 5.0.

However, another big difference — and this one is a step back — is the fact that Surface Pro 7 has a shorter battery life. Surface Pro 6 was capable of lasting anywhere between 13 and 15 hours, and many expected that the new model would be capable of achieving at least the same battery life. Unfortunately, that is not the case, and Surface Pro 7 only has eight to ten hours of battery life in it.

While this should still be enough to get you through the day, it is a step back from the old model. However, with a more powerful processor, it does not come as a surprise that the battery has been affected. And, as mentioned, 8-10 hours of constant use should still be enough for most people, even if it is used for work. 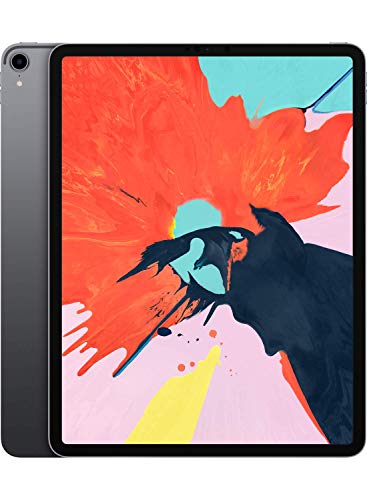 Now, let’s take a look at what Apple’s last year’s iPad Pro has to offer. This is a 12.9-inch iPad with Retina display, 264 pixels per inch, and 2732×2048 in terms of resolution. This model also has several versions, where the price changes depending on which one you pick.

That, of course, does not include an optional keyboard, which will cost you an additional fee, however. The model’s design is what you would expect of an Apple product — modern-looking, and pretty good. It measures 11×8.5×0.23 inches, and it weighs 1.4 pounds. On the front side, it has a 7-megapixel TrueDepth camera that supports Portrait mode, as well as Portrait Lighting. On the rear side, it has a 12-megapixel cam.

Of course, it runs on iPadOS, it supports Bluetooth 5.0, and 802.11ac, as well as a Nano-SIM and eSIM. However, it lacks when it comes to ports, only featuring SmartConnector and USB-C ports.

The model also comes with A12X Bionic in terms of processor, and several different storage sizes, depending on which version you choose. You get to pick between 64GB, 256GB, 512GB, and 1TB. Obviously, for some reason, Apple decided to skip on the 128GB version and add a smaller, 64GB storage instead. As for RAM, interestingly enough, it remains undisclosed.

Finally, when it comes to the model’s battery, it is relatively average and nothing that will impress anyone. The tablet can run up to 10 hours, which is fine, but not precisely superb.

The model is pretty good when it comes to multitasking, which comes as a result of the improvements that Apple has made to its iPadOS. It features a Files app that provides users with access to cloud storage, as well as to local files, which is pretty good. Further, the updated system also allows you to connect external drives and manage data from them. That includes opening files, copying them, or even saving them on the iPad. That goes for pretty much all common files, including photos, videos, PDFs, and other types of documents.

It should be noted, however, that iPadOS still uses the old mobile interface, which does not support mouse usage, even though there is mouse support for some reason. It could be that Apple plans to add the option actually to use the mouse at some point in the future, but no such feature is available for now.

In conclusion, iPad Pro is pretty good when it comes to tablet hardware design. It is aesthetically pleasing, and it comes with several OS improvements. However, it is pretty pricey, and it still has some software limitations. With that out of the way, let’s see how the two models compare.

When comparing the two, the first thing that comes to mind is the price. Surface Pro 7 wins in this regard. It is no surprise that Apple’s product costs extra than pretty much any other model with similar performance capabilities, although the difference is quite a lot. Even the additional keyboard costs more than the one for Surface Pro, which is cheaper than Apple.

In terms of dimensions, the models are relatively similar, although they differ just enough for iPad to have a larger display of 12.9 inches, while Surface Pro features 12.3 inches. Apple’s model is also 0.3 pounds lighter than Microsoft’s, although this is not too big of a difference that would make carrying Surface Pro around difficult.

Systems differ where iPad uses the improved iPadOS, while Surface Pro has Microsoft’s standard Windows 10 Home OS. Another similarity between the two is the battery life, where both last up to 10 hours, so there are no clear winners there.

However, Surface Pro does win without any doubt when it comes to ports, featuring many more than the iPad Pro. In addition to that, it also has better Wi-Fi, although the iPad has an advantage of supporting eSIM and Nano-SIM, while Surface Pro offers neither.

Storages are relatively similar, although Surface Pro comes with a 128GB at its base model, while iPad Pro has only 64GB. Surface Pro also comes with 3 different versions of RAM, while Apple did not disclose this information.

Finally, there is the matter of processors, and this matter might look easy at first, although in reality, it is a bit tricky. Microsoft’s model comes with new Intel processors, which might make it a clear winner. However, iPad Pro features an A12X Fusion chip, which makes it better for intensive tasks, such as 4K video editing, 3D modeling, and alike.

However, we should also keep in mind that multiple configurations of Surface Pro make it grow more capable, while iPad Pros all work pretty much the same, regardless of which version you buy. In the end, we view Surface Pro as a 2-in-1, a laptop, and a tablet, according to need and preference.

Apple’s iPad Pro, on the other hand, remains a tablet, mainly thanks to its mobile interface and lack of support for mouse. It may be a capable tablet, but it is still more of a tablet than anything else.

At the end, which is better for you depends on your own needs, and what you might be planning to do on these devices. Purchasing a more capable (and more expensive) Microsoft version will undoubtedly be beneficial, whereas Apple’s model works equally in all price ranges. They have a lot of similarities, which either means that Apple’s last year’s edition was quite advanced, or that Microsoft’s new model is not as good as many have expected.

However, as things are now, the two are relatively equally matched. Overall, although each has strengths in some areas and weaknesses in others. So, as mentioned, the final decision is once again up to you to make.