Everyone knows that building a good PC means that you need to be careful when picking components. You need it to be as powerful as you can make it, depending on your funds and situation. However, you also want it to look good and be as silent as possible. This is why you need to choose the best Quiet Cases for Your Silent PC as you can get, as well.

Gone are the days when PC cases were nothing but white rectangles with nothing but the most crucial requirements to mount hard discs and drives, in addition to your motherboard. PC aesthetics has become as important as its functionality, and manufacturers understand that quite well these days. Over the years, the regular white rectangles evolved into some of the most advanced, modern-looking, aesthetically-pleasing shapes that you see today.

These days, most cases are modular and designed to be compatible, and at the same time — packed with as many useful features as they can hold. New trends had an impact on how they look, feel, sound, and what they can offer. However, manufacturers did not forget to take customer feedback into account, either.

With the gaming industry evolving and becoming one of the biggest and most powerful industries in the world, a reasonable amount of attention went to designing PC cases in a way that would make them silent. While silent cases are popular for other purposes as well — nobody wants to listen to the buzzing sounds of their fan — the gaming industry seems to need it the most, as our PCs often make quite a bit of noise while running the most advanced games.

This is why you need a silent PC case — one that would look good, do the job of silencing noises, and still have as small an impact on the performance as possible. Now, most silent PC cases have their way of dealing with the sound, and often enough, they make a mistake by sacrificing a certain amount of airflow. This can be quite bad, as good airflow is essential for cooling. However, there are designers out there who recognize this as well, and they managed to find a balance that keeps your PC nice and quiet, but still able to operate at a high level without your processor melting.

So, to help you decide which silent PC case is the right for you, we have created a list of some of the best solutions that we could find. Hopefully, you will find an appropriate option among our choices. So, without further ado, let’s begin. 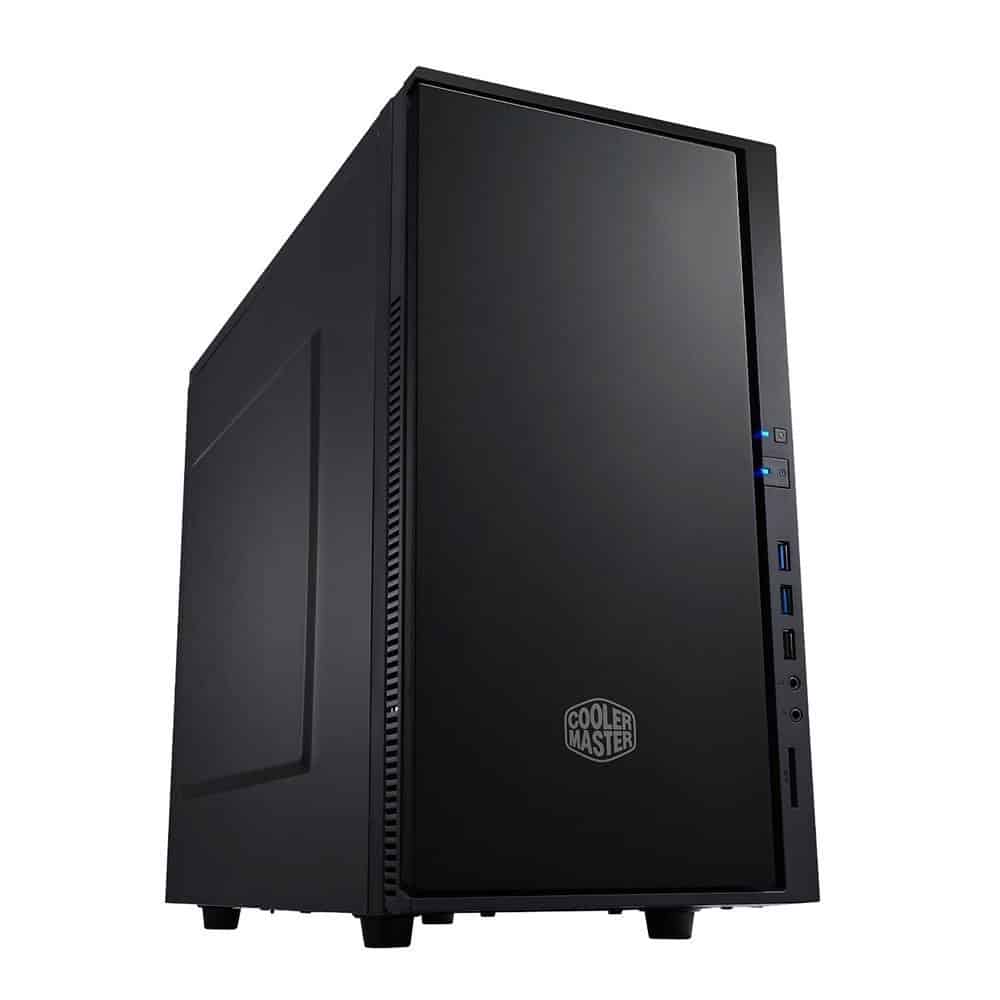 First on the list, we have an excellent option for those on a strict budget, that comes in the form of Cooler Master Silencio 352. An exciting thing about Cooler Master is that it was among the top providers of PC cases for years. It always carefully planned its PC case designs, even when it comes to low-priced models.

Silencio 352 is an excellent example of this, and it comes classified as a Mini-Tower. Its precise measurements are 17.8 x 7.8 x 14.9 inches, which makes it great not only if your budget is tight, but also if you have a problem with the lack of space. Of course, the obvious downside here is that it also only supports Micro ATX and mITX motherboards.

As you can tell from the name, this model was designed with the intent of providing users with a silent PC case. Silencio 352 achieved this through the use of foam-padded front and side panels, which stifle the noise quite well. However, it still has an excellent airflow thanks to two 120mm fans at the front of the case, as well as one at the rear, and another one on top. And, if you are more interested in introducing a cooling water system — that is an option as well, as long as the radiators are up to 240mm in length.

Another thing worth mentioning about Silencio is that it can back graphics cards up to 14 inches in length. There is also enough room for three 3.5” drives and four 2.5” drives. It offers lots of spare room for HDDs and SSDs alike. Behind the front door panel, you can even store a 5.25″ drive, which is perfectly suitable for a disc drive or fan controller. Finally, you can put a 6.1 CPU cooler in there, as well. 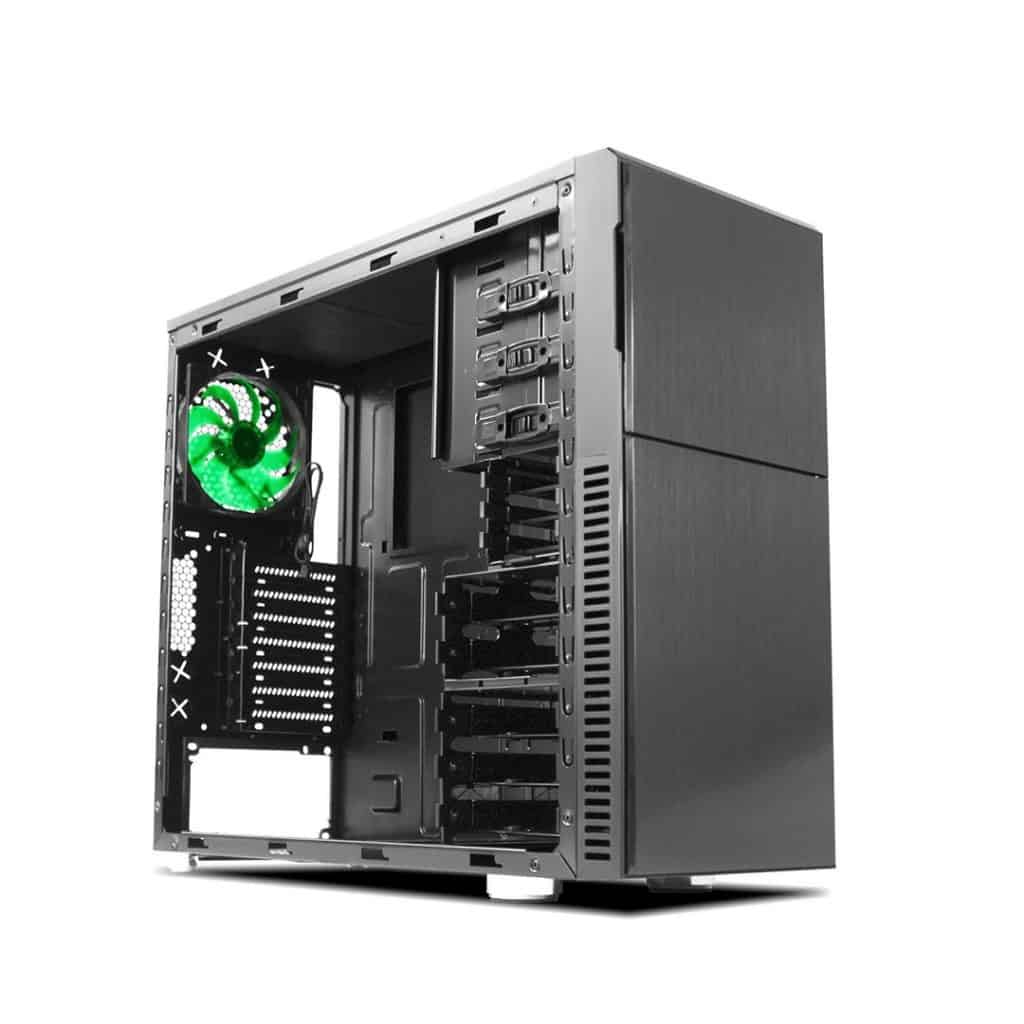 Then, we have Nanoxia’s Deep Silence 3 model. Nanoxia is not that well known, but this Germany-based firm makes excellent products, as we are about to see.

First of all, its Deep Silence 3 features a minimalistic design, which doesn’t make it look poor as you might expect. Instead, it looks professional and clean. The case can be classified as a mid-tower, and it is smaller than the previous one we talked about, coming in at 17.95 x 8.14 x 20.47 inches, as well as support for all three motherboards — Micro ATX, ATX, and Mini-ITX.

As far as the spare room goes, Deep Silence 3 can store eight drives in total, with three of them being 2.5”. When it comes to CPU coolers, their maximum height can be 6.5 inches, and the GPUs cannot be as long as 13.5 inches. The front panel features three USB ports, with two of them being USB 3.0.

Apart from that, there are multiple other features that you can look forward to, in addition to a solid built and an excellent design. But, we are here to focus on the silent component, which is something that this case does rather well. In fact, Nanoxia claims that their goal was to have a quiet case and still keep temperatures as low as possible. As you likely expected, Deep Silence 3 features sound-insulating materials, with HDDs placed through the use of rubber suspensions that don’t only reduce noise, but also vibrations.

Next on our list is Define S, which was initially introduced back in 2015. Ever since it was launched, this particular mid-tower case has been an absolute success. Its design is rather minimalistic, sleek, and modular, while it is made of high-quality materials. Of course, it is one of the best choices if you want a silent PC case, and it achieved low sound by lining the panels with sound dampening material.

That way, the airflow is not sacrificed at all, while you don’t have to continually listen to loud noises that would spoil your experience, whether you are gaming, working, or doing anything else. What’s more, Define S is built with water-cooling support in mind, as well. As a result, it features mounting points for radiators, as well as radiator support on the front and top of the case.

It also comes with two fans — Fractal Design Dynamic GP14 120mm. It should also be noted that the case does not come with hard drives and disc drives cages, but you can add both if you so desire, as there are mounting points for them as well. Now, regarding the price — this is a somewhat more expensive option. However, if you opt to try this solution, you are likely to agree that it is more than worth the extra money.

Another Fractal Design silent PC case that we have decided to put on the list is Define R5. This is a huge case for those who have extra space, as its measurements are 23 x 21.5 x 13 inches. However, even though it is quite big, it is also trendy.

It features the recognizable Fractal Design look that you will easily distinguish at first sight. However, its inside space is much bigger than that of our previous entry. As you can imagine, all that extra space can find its uses, and you should take full advantage of them. Let’s point out right now that the case supports Mini-ITX, ATX, and Micro ATX motherboards.

As for the reason why this model made a list — its silent component — Define R5 will satisfy your need for a quiet PC. In fact, it was designed to make it silent in the first place. It includes high-density noise dampening material, but it doesn’t affect the case’s thermal capabilities at all, which is the same as the previous model we mentioned.

It can house as many as nine fans, two of which are in the front, one in the rear, three up top, and two on the bottom. Finally, there is one for the side, meaning that your PC will remain cool at all times and from all sides. Furthermore, you have control over the fans thanks to the three-step fan controller, which you will find on the front of the case. It supports three fans at once. Also, you can set up radiators of up to 420mm, meaning that water-cooling is also an option.

It is not as expensive as the Define S, but it is not cheap, either, so keep that in mind.

Finally, we have to be quiet! Silent 800, which is another great solution for those who wish their silent PC case to have a lot of room to spare, and be silent at the same time. This is another full-tower PC case that offers an optional polycarbonate side window, sound dampening panels, excellent, stylish design, and more.

Be quiet! Silent 800 also has 3 Pure Wings 2 140mm fans, as well as removable dust filters, which will make the process of keeping it clean much more manageable. The filters are removable, and they are located on the bottom and the front of the case. Of course, as a full tower, the Silent 800 also comes with support for hard drives and SSDs, not to mention the fact that it has up to 3 external drive bays. One unfortunate detail is that it does not support EATX motherboards, even though it is a full tower.

However, it still has numerous other benefits, such as a considerable amount of free room right behind its motherboard tray, which is excellent for cable managing. However, if you happen to choose a great GPU, you will have to remove one of the drive cages.

On its front panels, there are 2 USB 3.0 connectors, as well as two USB 2.0 connectors. You will also find accents on the front vents, which can come in three different colors — orange, black, or silver. All in all, it is a great silent PC case for those who don’t mind the size, want extra room, and don’t want to have to bother with buying additional fans.

Choosing the right PC components is important, but if you wish a proper experience when playing games, working, watching a movie, and alike — you also need it to be silent and not distract you. Above are some of the best silent PC case options that we could find. Some of them are cheaper than the others, but all are bound to serve you well. Of course, you can always go out on your own and try to find a different solution. However, you should do proper research before doing so, as it would be a shame to make a bad choice that you might come to regret later on.