If you are interested in Microsoft’s Surface Pro line of two-in-one laptops, it might be difficult to choose between different models. After all, Microsoft is known for implementing only small changes at a time, and it also goes back-and-forth in terms of the specs, at least when it comes to base models of its products.

With that in mind, we have decided to help out those who might be unsure of whether to go for its Surface Pro 7 or to choose Surface Pro X. Because of this, we will now review both models, and try to compare them after that. Hopefully, along the way, the answer to which of the two models is better will become evident, and we will have our answer. Let’s begin.

As you may have heard already, Microsoft’s new Surface Pro 7 does not differ that much from its predecessor, Surface Pro 6. This is especially true when it comes to design, as the two models are nearly identical when placed one next to the other. The most significant difference between the two lies in the fact that Surface Pro 7 comes with a USB-C port, which is an addition that Microsoft product’s fans have been waiting for, for a long time.

In terms of connectivity, it features the new USB-C 3.1 port, as well as USB-A, 3.5mm audio jack, microSD card reader, and Surface Connect. On top of that, you get Wi-Fi 6 and Bluetooth 5.0. The dimensions remain 11.5×7.9×0.33 inches, and it weighs around 1.7 pounds. In terms of color, it comes as Matte Black or Platinum, depending on your preference.

Now, when we look under the hood, we will see a familiar 10th Gen Intel Core CPU, and depending on the version, there are three different ones — i3, i5, and i7. A similar scale is included in terms of RAM, where different versions come with 4GB, 8GB, or 16GB, and the same is right for storage, which has 128GB, 256GB, and 512GB, with 1TB SSD. As for graphics, you get Intel UHS for the i3 version or Intel Iris Plus for the other two.

Its battery life is also not particularly impressive, especially when compared to an older model, which lasted for 15 hours, This one lasted around 8 hours during tests, although Microsoft estimated that the battery life should be at approximately 10-10.5 hours. The model also improved its microphones, which could be useful for those who plan to use it for business calls and conference meetings, or solely for giving instructions to Cortana, if you don’t like doing absolutely everything manually. It also has an excellent keyboard, which is a big plus if you need a good model for writing and similar purposes.

In summary, not much has changed from Surface Pro 6, apart from the addition of the new USB port. One thing that was a bit of a strange change is the fact that the base model is back to Intel Core i3, as well as the lower RAM and storage, although this can be improved simply by going for a better version, as there are 3 of them.

Also, while the battery is significantly shorter, Surface Pro 7 does feature a few smaller improvements which might be useful to some people. 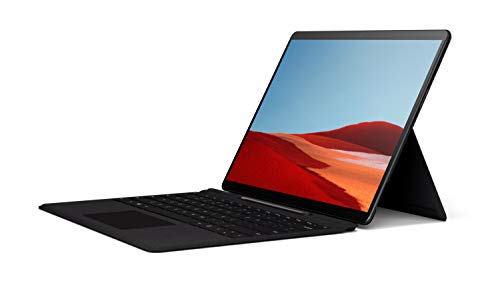 On the other hand, we have Surface Pro X, which was announced on the same day as Surface Pro 7, and it came as a significant surprise for the Microsoft users.

As you may have expected, the model comes with a traditional, easily recognizable Surface Pro design, which might not matter to some users, and yet it might be a bit outdated to others. The look of this line is undoubtedly unique in the enormous market, but the fact remains — if you have seen on Surface Pro, you have seen them all.

Of course, this model comes with a few more changes than Surface Pro 7, which we talked about above. It is the thinnest and lightest model in this line to date, and it supports LTE, it has a different CPU, as well as a smart design with a new Surface Slim Pen, among other changes.

Naturally, it runs the Windows 10 operating system, and it also uses Microsoft’s SQ1 processor, which was created in cooperation with Qualcomm, and which runs on 7 watts, although most of the processing is done at only 2 watts.

In terms of RAM, it comes in two versions, where one features 8GB and the other 15GB. The storage also tends to vary depending on a version you buy, and you get to choose between 128GB, 256GB, or 512GB SSD. It also features Microsoft SQ1 Adreno 685 GPU, and, as mentioned, it comes with LTE support, featuring Qualcomm’s Snapdragon X24 LTE modem.

It also has two USB-C ports, and it supports nano-SIM, as well as Surface Connect, but that’s pretty much it. On top of that, it has Wi-Fi 5 and Bluetooth 5.0. It has two cameras — a front-facing one (5MP, 1080p) and a rear-facing one (10MP, 4K video), as well as an IR camera in the biometrics department.

Finally, its battery life is quite satisfying, as it can last up to 13 hours, meaning that this model can stay perfectly functional for an entire day, and it would likely be enough only to charge it at night.

Now, with that out of the way, let’s see how these two models compare, and which one might be a better option to choose from in 2023. Especially if you don’t plan on waiting for an entire year or more for some of the future installments to arrive.

When it comes to the design itself, there are not a lot of changes to Surface Pro 7, when compared to previous models, as mentioned before. In other words, Microsoft did not surprise us in any way. Pro X, on the other hand, comes as a significantly thinner model, which might be attractive to those who appreciate a slightly more modern look. Neither of the two is bad, of course, but Pro X does come with a bit different aesthetics, which is good, and it helps it stand out from the rest in this line.

However, Pro 7 might be a slightly better option in terms of performance, as the tests show that it is a bit faster than Pro X, at least when it comes to its Core i7 version. This is a laptop-like performance, which is excellent for those who plan to use native apps. Surface Pro X, however, requires running all the Windows 10 apps in emulation, although this one performs faster than other Surface Pro gadgets. For example, it beats the Pro 6 model with no problem thanks to the new CPU.

Surface Pro X also has a somewhat larger display, with better resolution, although the PPI number is identical. When it comes to ports, however, Pro 7 offers more, especially with the addition of USB-C port.

Surface Pro X versions are better in terms of RAM, but the storage size is mostly the same, although Pro 7 also has a 1TB version, which lacks when it comes to Pro X. On the other hand, Pro 7 also has a significantly shorter battery life, which can be very important for those who are often on the go, and they need their device to be charged and capable of surviving the entire day of use.

Surface Pro also has a stronger rear camera, which is even capable of 4K video, where Pro 7 rear cam only supports 1080p. However, Pro X also lacks Wi-Fi 6 connectivity, while Pro 7 has it, it doesn’t have an audio jack, and it is more expensive when it comes to its base version.

In the end, both models are pretty good, with improved performance, although the decision of which one to buy largely depends on what you are after, and what you need it for. Pro X’s ARM definitely has some limitations, but Pro 7 lacks LTE, has a shorter battery life, and a smaller display, so you should do well to consider both what each of the models has, and what it lacks and make your decision from there.