The Huawei MateBook X Pro is still one of the toughest laptops to beat in the Windows operating system spectrum as it is bet to be a great contender to the Apple MacBook Pro, of which many manufacturing companies are working to overcome. And one of those competitors is the Texas-based Dell, whose reputation in the mobile computing environment became famous for unearthly gaming laptops and everyday laptops that are reliable when it comes to customer support and durability. On this round, we’ll be having the Huawei MateBook X Pro vs Dell XPS 13 to confirm if the newly souped-up laptop will come close, or at least defeat Huawei on some measure. Let’s check the outsides and insides of both laptops to see which performs better, specs-wise, and user-wise.

At first glance, you’ll obviously see that the Dell XPS 13 is smaller than the Huawei MateBook X Pro when it comes to screen size, body size, and thickness. In particular, the XPS 13 measures 302mm long, 199mm high, and 11.6mm wide. On the other hand, the MateBook X Pro scales at 304mm in length, 217mm in height, and 14.66mm in width. Due to the difference in height, the screens of both laptops are mainly affected by the aspect ratio level, with Dell focused on 16:9 and 3:2 for Huawei.

The overall dimensions of the laptop are also parallel to the weight of the whole thing, with the XPS weighing only at 1.23kg, while the MateBook is at 1.33kg. Now that 10 grams may not be much, but means a lot if you’re used to carrying small laptops for bringing it to different places. 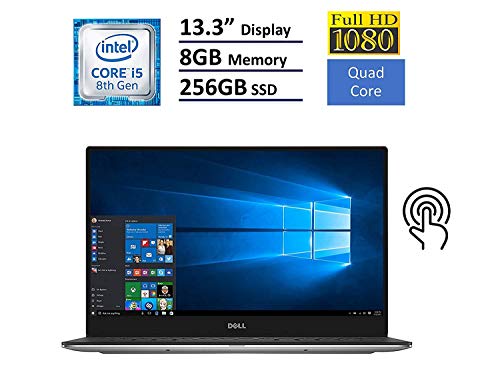 We have seen that the aspect ratio is different due to the dimensions of the screen. And when it comes to screen size, the Huawei MateBook X Pro has more to display at 13.9 inches, while the Dell XPS 13 comes short with 0.6 inches at 13.3 inches in total. As for overall resolution, the X Pro can display 3000 x 2000 pixels while the contender shows power and clarity at 4K Ultra HD, 3840 x 2160 pixels. We can see clearly that size is not a total determinant for showing strength in the visual category. Though the XPS 13 is smaller, the performance is more concentrated, therefore rendering sharper, better, and clearer images for movies and games.

Bezels are also the name of the game between these two laptops, as both are offering screens that expand to almost infinity. Both the XPS 13 and the MateBook X Pro are offering a touch screen display that provides a different level of interaction for programs, apps, and software.

When it comes to the battle for speed, the MateBook X Pro does not go far with the Dell XPS 13 as both are sporting the 8th Generation Intel® Core™ i7 with the XPS slightly carrying a more updated version than the X Pro, being Kaby Lake for Huawei and Whiskey Lake for Dell. The difference on the speeds between the two processors are slim, but the one from Dell can provide max bandwidth of 37.5 GB/s while Huawei’s laptop is a little slower at 34.1 GB/s. Turbo boosting is also faster with the Whiskey Lake at 4.60GHz in its biggest boost, while the one from the MateBook X Pro is a couple of megs slower at 4.0GHz.

The rest of the supported specs are the same when it comes to video, memory specifications, and the majority of the performance factors. Both processors have 4 cores with 8 threads, needing 15W of power for delivering at regular operation, and can provide top speeds when powered up at 25W. The two processors have 8MB SmartCache and have a bus speed of 4 GT/s OPI. As for graphics, it can run an Intel UHD Graphics 620 at default and can support DirectX 12 for the latest games and demanding programs.

Upon purchase, you’ll see the Huawei MateBook X Pro with a 16 GB LPDDR3 2133 MHz RAM, while the Dell XPS 13 comes with an 8GB LPDDR3 2133 MHz RAM. Though the match for speed may be inches apart when the laptops are fresh, both of them can be souped up to 32GB RAM, which covers everything you have in mind when it comes to running powerful apps at simultaneous operation.

As for disk spaces, you would be getting a 512 GB NVMe PCIe SSD with the MateBook X Pro, while 512GB M.2 PCIe NVMe is included when buying the XPS 13. The difference between the two is not that distant, and you’ll only notice the impact of the M.2 when opening various programs at once. But for that smooth-sailing ride, you’re encouraged to get an additional HDD for storing multiple files – leaving the SSD for applications and games.

The Huawei MateBook X Pro plans to provide an all-rounder user experience for its varying types of customers, especially when it comes to meeting expectations in rendering graphics. They have incorporated a dedicated GPU, being the NVIDIA® GeForce® MX150 with 2 GB GDDR5, along with a stock GPU for general operations, the Intel® UHD Graphics 620. What this means is that whether you’re playing demanding video games or you’re just using your Huawei laptop for everyday tasks, the MacBook look-alike will deliver lagless and seamless performance.

For the Dell XPS, it opted for the option of maintaining its reputation of being an on-the-go laptop for everyday operations. The Intel® UHD Graphics 620 is more than enough of a staple GPU to keep things in shape.

For accessibility among devices and accessories, the MateBook X Pro has 1 port for every device you could think of. That’s 1 3.5mm headphone jack for your sound needs, a USB Type-A port with 3.0 technology for speedy transfers, a USB Type C port for basic charging and connection with the MateDock 2, and a Thunderbolt 3 port for that demanding huge data transfer and high-speed charging for high-end devices.

For the XPS 13, you get to have lesser port types, but more port slots for modern gadgets. You get to have 2 Thunderbolt 3 ports designed to charge devices and accommodate their DisplayPort, a USB Type C connection that has 3.1 technology, a MicroSD card reader, and a headphone jack. It looks like you’ll be needing some sort of adapters to use legacy USB cards or flash disks.

This is one of those fields where Huawei falls short, considering that a camera is just as crucial for interaction, communication, and recognition. Unfortunately, the MateBook X Pro only has 1 MP camera that provides anything but basic for Skype calling and teleconferencing using the onboard camera.

As for Dell, they aced this particular aspect with a widescreen high-definition camera that’s capable of rendering 720p quality for those engaging calls and meetings via the laptop. The camera’s lens is 2.25mm big to make sure that everything is captured right at the detail, giving people the impression that you’re not using an embedded laptop cam.

The XPS 13 is also equipped with 4 array digital microphones to provide audio clarity for conversations and voice recognition. In fact, the microphones are also utilized to be Far Field Cortana capable, which is an available option for device interaction and convenience. Meanwhile, the MateBook X Pro has deployed quad digital microphones to meet communication needs.

In the audio output section, the Huawei MateBook X Pro is fighting by the numbers. Quad speakers, enhanced by the Dolby Atmos Sound System, is set to provide a pleasurable listening experience to the MateBook users. As for the Dell XPS 13, they opted for two professionally-tuned speakers that are tweaked and developed by Waves MaxxAudio Pro.

As for battery life, the Huawei MateBook X Pro shows higher numbers at 57.4-watt-hours, which, per Huawei Labs, can play 12 hours of video non-stop, with settings optimized for testing usage. With the Dell XPS 13, the total battery span only lasts for 52-watt hours and may fall a little short when it comes to supporting the same applications.

Both the Huawei MateBook X Pro and the Dell XPS 13 has features and specifications that meet the needs of modern-day laptop seekers. Processor performance, size, image display, and multimedia functions are almost identical if observed and analyzed by an average person. Some of the factors that may consider the winner between these two may include their intent for owning their desired laptop – with one serving legacy users and gamers, while the other is more inclined with contemporary and the office buddy type of person.

But whatever your choice is, there’s no loser to buying either Huawei or Dell as both are high-end laptops that were created to please, even the most meticulous but budget-conscious customer.