New gamers often overlook the importance of a good motherboard when building their first mining rig. As a result, they face the risk of buying a motherboard that doesn’t support a high amount of GPU configurations in the BIOS. To avoid making that mistake, you need to consider the best types of motherboards that are compatible with your entire mining system. So, when you’ve acquired a good CPU and graphics cards, it’s important to choose the right motherboard as well.

With a plethora of options available for motherboards, it’s necessary to choose the right one for Bitcoin mining. As we mentioned earlier, not all motherboards will be ideal for mining, even if they have good features. Just because a board has the required amount of PCIe lanes doesn’t mean it BIOS settings will be fit for Bitcoin mining.

So, you have to be sure it has the specifications and the required BIOS update for mining. After extensive research, and based on our experience, we have put together the best motherboards for Bitcoin mining. These are designed specifically for mining and would fit into the profile of many mining rigs. 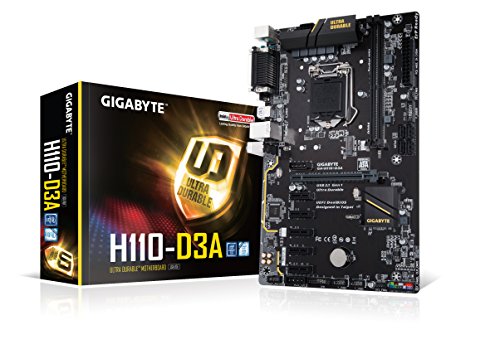 Surely, this best motherboard for Bitcoin mining list won’t be complete if we fail to include a Gigabyte brand. Actually, the brand has several other good motherboards for mining, but we decided to pick this one because of its high cost/benefit ratio.

It’s the cheapest on our list but not the least impressive.

If you’re looking to build an economical rig for standard profits daily, there is no need to invest in premium boards that will eat deep into your budget. Investing on this Gigabyte board would do you a lot of good.

Despite the budget-friendly price, it still comes with good features. It offers support for the latest DDR4 RAM technology. Moreover, it’s an ATX motherboard, making it ideal for mining. This board can fit about 6 graphics cards. Although it’s far below what other boards can accommodate, 6 graphics cards will be enough for basic mining activities, especially for new miners.

Besides, too many GPUs can even cause more problems for mining since Windows operating system does not recognize more than 8 graphics cards on a single system. In that case, a motherboard with lesser GPU slots may be ideal for you. So, you can still reach optimal performance when using this motherboard.

So, if you’re a new miner looking for the best motherboard for Bitcoin mining, this one will fit your system.

Another interesting aspect of the motherboard is the processor compatibility, as it’s compatible with both Intel and AMD processors. 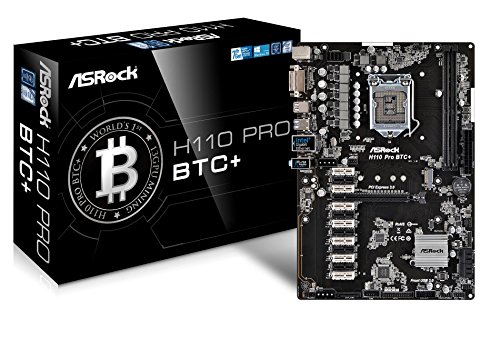 AsRock motherboard is the personal favorite of many miners because it has something special for mining and even gaming. The compatibility feature makes it highly demanded in the Bitcoin mining industry. When we are talking about compatibility, we are refereeing to all Intel processors, including the i7, i5, and i3 models, as well as Pentium series processors. Again, the motherboard is compatible with NVIDIA and AMD GPUs, making it the mining favorite for many developers.

Additionally, the DDR4 RAM slot comes with a maximum frequency of 2400 MHz, as well as 13 PCI slots for the installation of 13 GPUs and some nice hash rate conversion.

To keep the level of temperature in check, this motherboard comes with 2 copper layers. When mining, you don’t need to bother about taking tour system to extreme temperature levels.

Whatever type of crypto coin you want to mine, whether Bitcoin, Ethereum, or Monero, this motherboard will work fine.

While some of the boards we have listed here are not made specifically for mining, this motherboard comes with factory settings for mining. That’s why it remains very popular among mining enthusiasts.

So, there is no need to configure or update any BIOS. You can install it straight away and start enjoying the benefits. If you’re looking for the best motherboard for Bitcoin mining, this one will serve you well. 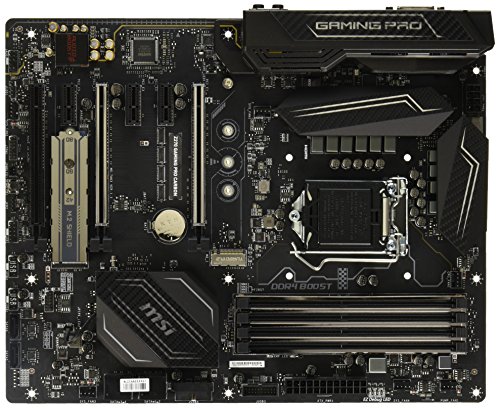 If you are looking for the best motherboard for Bitcoin mining and you are short on cash, MSI Intel Z270 will be a good fit. Although it is designed for gaming rigs, you don’t need to do much of tweaking to get it set for your mining system build.

The features of the motherboard are impressive, as we are going to see below.

The board comes with an LGA-1151 socket with DDR4 support, which makes it perfect for mining. Also, it’s very easy to fit any latest generation processor (Add link here) with this model, as it supports a wide range of them. More impressive is the fact that the motherboard is capable of holding up to 7 graphics cards, which will boost your mining activities by a wide margin.

Some gaming motherboards would even be more useful to miners than gamers. That’s exactly how we can describe Intel Z270.

Before the advent of Blockchain technology and Bitcoin, motherboards were strictly manufactured for multitasking and gaming needs. Now, as mining has come into the framework, computer manufacturers are adding features to make them compatible with building mining systems.

With Intel Z270 you have all the features you need for building a mining rig. Compared to other boards, the Z270 does a pretty good job of getting benefits of hash rates even though it is exclusive to gaming.

One of the more assuring things about the motherboard is the fact that it comes with a RAM module of DDR4 3600 MHz, meaning that it’s possible to load the system with more powerful RAMs. And with more RAMs, you will have the necessary rig tools for your Bitcoin Mining Additionally, the board has multiple GPU slots, which will help you do SLI or Crossfire for improved mining performance. 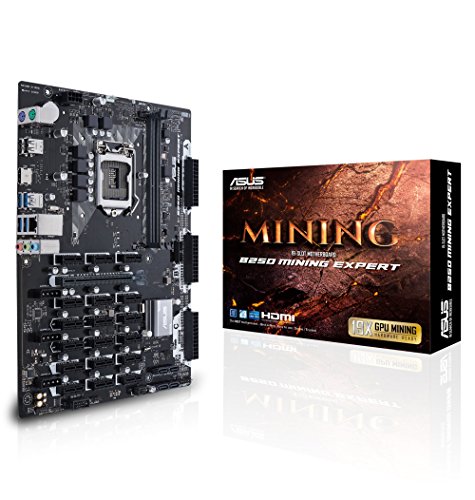 ASUS B250 may be on the fourth in our list, but we had to save the best for last. A few months ago, developers were wondering whether it’s possible to have 7 GPU connections on one system. Well, ASUS has proven time and time again that motherboards can go beyond that limit. With the introduction of a powerful and feature-laden motherboard like B250, all the questions mining professionals have are now answered.

It comes with an amazing 19 PCIe slots, which means you can connect 19 graphics cards to the motherboard. That will give you ultimate mining performance!

One good thing about this motherboard is the fact that it was designed strictly for miners.

This is the best motherboard for Bitcoin mining by a long mile. Interestingly, it’s still offered at the same cost as other lesser motherboards. If you want to hit the ground running quickly, you will need to build your mining rig with the ASUS B250 motherboard. 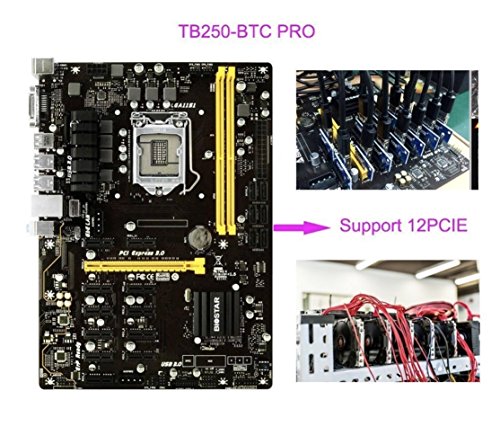 Biostar may be new in the industry, but its flagship product TB250-BTC PRO has won the hearts of many Bitcoin miners.

When people want to mine, they always settle for Ethereum or Bitcoin, because they believe both coins are the most valued with the best profits. If you’re looking to mine either of these cons, you will need the best components in your system, including the best CPUs and the best motherboards. That’s where TB250-BTC PRO motherboard comes in.

The features of the board are also impressive, which include LGA-1151 socket support, and support for both 6th and 7th generation processors.

If you want an economical board for building a mining rig, this motherboard fits that description. You can also install 12 graphics cards easily. It offers support for all processors that are based on LGA-1151 sockets.

If you are looking for a low-budget motherboard with the right features for Bitcoin mining, this motherboard comes pretty close as the best in the market. The idea of having up to 12 GPUs is to boost mining, which is well appreciated by enthusiastic Bitcoin miners.

If you’re a professional miner, you won’t have issues with boards like Biostar. But you have to deal with some of its limits. It does not have a wide range of processors it supports. So, if you’re buying this motherboard, you need to be sure it supports your processor.

ASUS doesn’t need any introduction, as the brand has served both gaming and mining enthusiasts for many years. This model is great for those who want to take their Bitcoin mining to the next level.

It’s an impressive motherboard for 8 GPU rig build. Although the motherboard is a little more expensive, we felt the need to include it here because of the adaptability for mining rigs.

Also, note that it isn’t technically known as a mining motherboard, but ASUS did an excellent job to make sure it is compatible with Bitcoin mining

When choosing this motherboard, you will need to configure a little BIOS settings to get it to support all 8 GPUs. It’s simple to configure with the instruction manuals.

Overall, this is one of the best motherboards for Bitcoin mining when you consider its compatibility with other components.