For those looking to manage a high-end computer system, having a powerful cooling system is as important as anything else.

That’s because, without the right type of cooler, you may not get the level of performance you desire. Plus your CPU may burn out and overheat when the temperature is too high. But with a powerful cooling system, you can enjoy your PC for a very long time without any temperature issues.

Ryzen 7 3700k is the latest generation of AMD processors that delivers superior performance. To deliver such high-level performance, it generates a lot of power.

As a result, the CPU needs a top cooling mechanism to keep it in the right functioning capacity. So, if you’re looking for the Best CPU Coolers for Ryzen 7 3700X, you’re in luck.

For most PC builders, the Noctua cooler brand is synonymous with efficiency when it comes to CPU cooling. Although the brand manufactures other things, it seems it has become perfect at producing a top CPU cooling system. This Noctua NH-D15 CPU cooler is no exception.

It’s the latest model to the previous NH-D14 model, but with additional cooling capacity.

Installing this cooler is a breeze, as long as you follow the instructions. It comes with all the installation kits, including voltage regulator cables, an additional fan, extended Philips screwdriver, as well as thermal paste.

This unit is a dual-fan cooler, so you should be expecting improved performance compared to other types of coolers.

The extra fan will add more cooling performance to the unit, but remember that it will also increase the height, which may result in the RAM clearance problem. If you don’t want to risk it, you can satisfy yourself without the extra cooling fan.

The cooler is also one of the best CPU coolers for Ryzen 7 3700X when it comes to design. Both sides have two sets of fins flanked by aluminum heat-pipes, with the fins installed at the front and the middle.

The heat pipes and the base of the cooler are designed with copper material. All these durable components installed in the cooler make it a very tough cooling system for your AMD CPU.

That’s the reason it came with an impressive 6-year warranty for all parts of the product.

Apart from the color scheme that could have been made better, we couldn’t find any fault in this cooler. It’s highly recommended for those looking for the best CPU coolers for Ryzen 7 3700X. 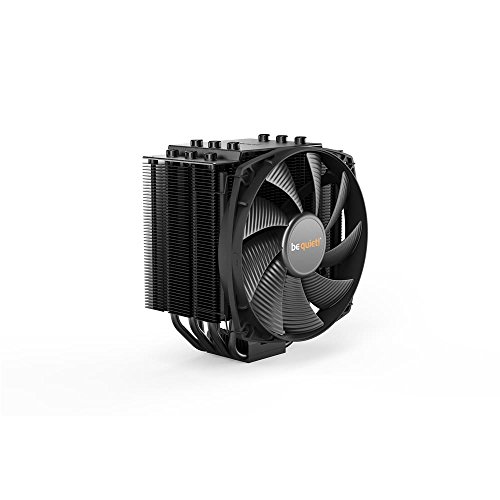 The Dark Rock coolers are top-performing series made up of top-flow, single tower, and double tower cooler designs.

This cooler provides superior cooling performance and stays relatively quiet while doing so. It’s the type of cooling system you will need if you are using your computer in a quiet environment. If you are targeting a system with air-flow design, this cooler should be the ideal one for you.

The silent operational mode of the cooling system is because of the two silent wings PVM fans. The fans feature airflow-optimized fan blades, smooth six-pole motors, as well as state-of-the-art fluid-dynamic bearings.

It is also equipped with dual tower aluminum heat sinks and provides support for RAM compatibility.

Dark Rock is one of the best CPU coolers for Ryzen 7 3700X, although it supports other CPUs too. The fans are pre-installed, but there is a space for an additional fan to boost cooling performance.

The brand provides a 3-year warranty for this cooling system, which speaks a lot about its durability. 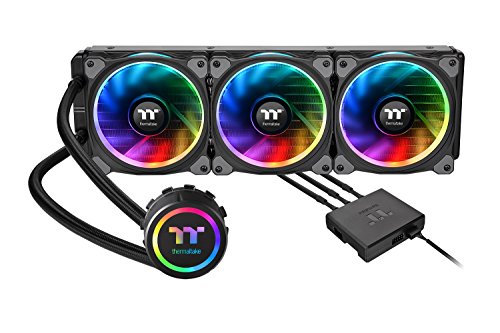 As an AIO liquid cooler, the Thermaltake cooling system offers versatility for different CPUs. Although it’s one of the best CPU coolers for Ryzen 7 3700X, the cooler is also compatible with some other types of processors.

It is equipped with additional fans and a digital control LED rings, with the cooling system providing support for both Intel and AMD sockets.

Just like other good CPU cooling systems, Thermaltake has a copper-built base at the pump, which provides superior cooling performance for your AMD Ryzen processor.

With the 3x120mm fans and 360mm large radiator, this cooling system can deal with so much.

But one of the most impressive features of the cooler is the Tt LCS certification. The certification is evidence of quality and toughness in providing strong cooling temperatures for different processor models. Other notable features include AI Voice control and the TT RGB Plus ecosystem.

Again, Thermaltake comes with three Ring DUE RGB fans that are controlled by the TT RGB software for optimum cooling performance.

The controller has a DIP switch at the back, which allows you to set a number for each of the controllers. This means you can easily add about 16 controllers to a single software and 5 devices to one lighting controller.

If you are looking for the best CPU coolers for Ryzen 7 3700X when it comes to aesthetics and performance, this model will be great to have. 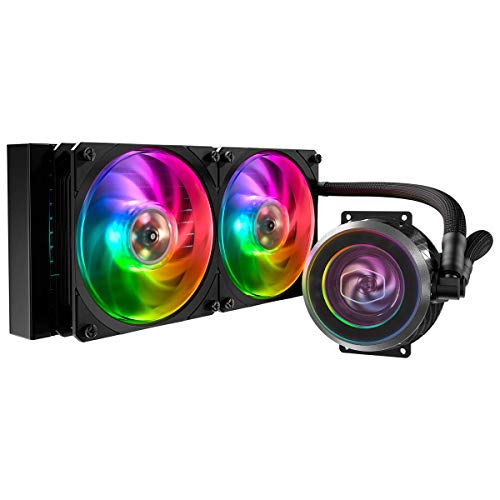 Although Cooler Master is the last on the list, it is certainly not the least important here. It doesn’t just come with a fancy name, but the cooler is also tough and effective at its job.

It’s the perfect cooling system for those who want top-performing CPU coolers for their gaming rig. With this unit, you don’t need to bother about overheating or thermal throttling because the fans will take care of these issues.

And we are looking at one of the best CPU coolers for Ryzen 7 3700X when it comes to design. So, apart from being tough, the cooler is very pretty.

In terms of performance, the cooler surely deserves a place on this list of best CPU coolers for Ryzen 7 3700X.

It comes with a low-resistance radiator and EPDM rubber O-Ring for improving exchange efficiency, flow rate, and cooling performance.

With liquid and temperature resistance nozzle as well as PPS+glass fiber housing, the system will surely keep your processor’s temperature in check at all times. 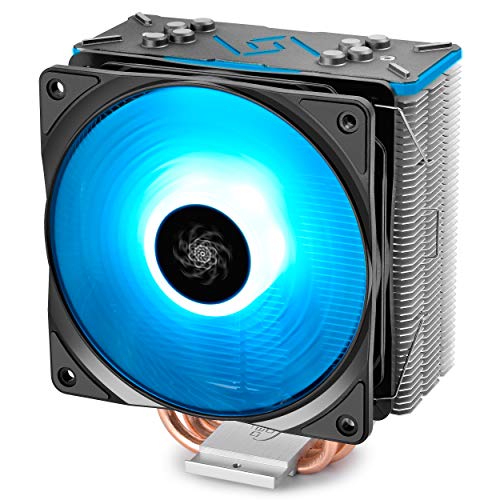 DEEPCOOL is a good choice for many people because of its reliability and compatibility with different AMD processors apart from Ryzen 3700X.

It is built with 7 high-tech heat pipes and designed in a unique thermal module layout. It utilizes groove-sitter technology, increasing the internal surface area of the heat pipes.

The Ryzen 3700k is a powerful processor that requires a top-performing cooling system. DEEPCOOL is certainly an ideal match for the CPU.

The design may not be as impressive as its performance, although many people will pick performance over design any day.

It comes with dual-layer fan blades that improve the airflow. It also has a patented teeth shape design which is spread irregularly to prevent too much vibration.

The cooling system has quiet fans, even when they are working in their optimum capacity. And its chunky look does not stop it from providing a RAM clearance of 54mm.

Scythe is not a new brand when it comes to the manufacture of PC components. The brand has a track record with more than 2 decades in the PC cooling industry. This Mugen CPU air cooler is a perfect representation of their manufacturing prowess.

The cooler is the latest version of the Mugen series. However, this one comes with improved cooling performance.

This cooler has so many accessories to help you install with ease. Apart from the 12mm fan, you will get a screwdriver, thermal paste, as well as mounting hardware for both Intel and AMD processors.

Mugen 5 is one of the most versatile CPU coolers in the market because it is compatible with different Intel and AMD CPUs.

The design is also impressive, with 6 large heat pipes and a set of uniformly spaced-out 38 fins in the middle of the cooler.

The heat pipes and fins have silver color, which matches the fan’s matte black color.

But there is a disadvantage to that. It means you are probably going to cover too much space, which may lead to some issues.

Just like the Noctua model we listed above, this one is another impressive product in terms of cooling performance. However, it’s a low profile cooler for Ryzen 7 3700k, with 70mm in height.

The small size does not reflect on its performance in any way. It comes with a 15mm 120mm PWV fan which operates quietly, just like other Noctua CPU cooling models.

For those who want to build a system with an ITX Ryzen 3700X, this cooling system will be the ideal choice to include as the cooling fan. It’s also perfect if you are looking for a very compact model that will not cover most of the space within your system.

The low-noise adaptor and PWM support offer ultra-quiet operation and automatic speed control. That’s because there is a mechanism in place to make sure the fan is very quiet when the CPU is not used in full capacity.

Installation of this CPU cooler is also a breeze, with installation instructions provided. Overall, if you are looking for the best CPU coolers for Ryzen 7 3700X when it comes to affordability, few models are comparable to this cooler. 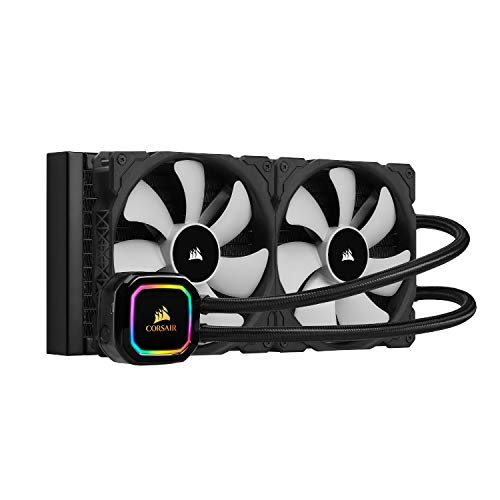 Corsair H115i is the latest version of the Corsair cooling system series. Corsair H115i CPU cooler features a 280mm radiator, which keeps it at the center of the other two versions – H150i (with 360mm radiators) and the H100i (with 240mm radiators).

If you are looking for the best CPU coolers for Ryzen 7 3700X, this is the right one among the Corsair models.

One of the major differences between this cooler and other models is the feature of non-RGB cooling fans. Yes, this may be a turnoff for some people. But these cooling fans have their advantage over the RGB cooling fans.

With the non-RGB ML cooling fans, you can install this unit very quickly because there are no RGB wirings to worry about.

Also, it has reduced the overall cost to a great extent. So, if you’re looking for the best CPU coolers for Ryzen 7 3700X in terms of affordability, this model comes pretty close.

This cooling system is also less noisy compared to other coolers, making it an ideal choice for those working in a quiet environment.

The Zero RPM mode installed in the cooling system allows it to stop completely when the CPU is not working too much.